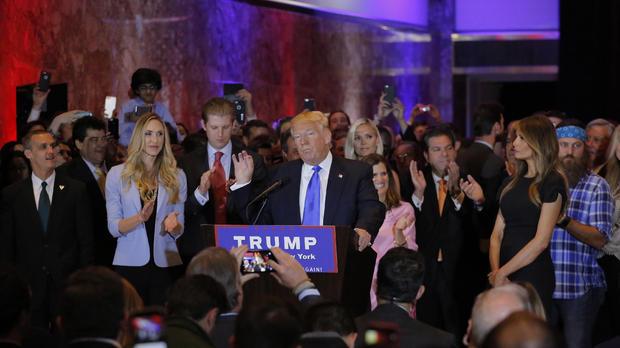 After resounding victories across the Northeast on Tuesday, both Republican front-runner Donald Trump and Democratic front-runner Hillary Clinton demonstrated that they're ready to turn their focus squarely to the general election.

"I consider myself the presumptive nominee, absolutely," Trump said to CBS News' Major Garrett from his rally at Trump Tower in New York City.

After sweeping all five GOP primaries in Pennsylvania, Connecticut, Maryland, Rhode Island and Delaware, Trump made a convincing argument. Similarly, Clinton won four out of five of the Democratic contests, building upon her nearly insurmountable delegate lead over Bernie Sanders.Trump on Tuesday night launched into one of his most aggressive attacks to date against Clinton, honing in on her email controversy, citing Sanders' attacks against Clinton, and even charging that Clinton only has support because she is a woman.

"If Hillary Clinton were a man, I don't think she'd get 5 percent of the vote," he declared.Meanwhile, in Philadelphia, Clinton was ready to return the fire. "Now, the other day, Mr. Trump accused me of playing the, quote, 'woman card,'" she said. "Well, if fighting for women's health care and paid family leave and equal pay is playing the 'woman card,' then deal me in."

She attacked Trump -- not Sanders, her primary opponent -- while promising her Philadelphia supporters to return in July for the Democratic convention "with the most votes and the most pledged delegates." She added, "And we will unify our party to win this election."On the Republican side, even with his opponents teamed up against him, Trump obliterated John Kasich and Ted Cruz on Tuesday night.

"When you crack 60 [percent] with three people, that's very hard to do," Trump said after his five victories, making note of the wide margins by which he won the races. He did indeed win more than 60 percent of the vote in Delaware and Rhode Island, and he came close to it in the other three contests.Trump didn't just trounce his opponents -- he convincingly undercut the justification for their collusion.

"What Donald calls collusion is actually coalition building," Cruz said to Indiana radio host Tony Katz on Tuesday morning. "It is how you win. To win you've gotta build a majority, and I understand this is something very foreign to Donald Trump because he has not been able to build a majority anywhere. The only state he won a majority in is his home state of New York. And you cannot become the nominee if you cannot win a majority."

After hearing so much about his alleged ceiling of support, Trump said Tuesday night, "You know what our ceiling is? I think it's 100 percent."

The billionaire businessman turned the tables on his opponents, underscoring their lackluster support. "Sen. Cruz and Gov. Kasich should really get out of the race. They have no path to victory," he said.After his weak showing Tuesday night -- coming in third in four of the five contests -- it's now mathematically impossible for Cruz to clinch the GOP nomination outright with 1,237 delegates.

Meanwhile, Kasich isn't even close. As Trump pointed out, the Ohio governor has only won one of 43 nominating contests and still trails Sen. Marco Rubio -- whodropped out of the race more than a month ago -- in the delegate count.

Speaking at a rally in Knightstown, Indiana, Cruz insisted Tuesday night that Trump can still be stopped. "Tonight this campaign moves back to more favorable terrain," he said, listing the upcoming contests in western states and Indiana. Kasich is ceding Indiana to Cruz, while Cruz is giving up campaigning in Oregon and New Mexico to clear the path for Kasich.

While the upcoming contests may be on less favorable ground for Trump, there's evidence from Tuesday night's exit polling that voters may not be on board with the Kasich-Cruz collusion strategy. For instance, around 30 percent of Kasichvoters in Pennsylvania and in Connecticut said they would not vote Cruz if he is the nominee. In Pennsylvania, just 10 percent of Kasich voters said they would definitely support Cruz in November.While Trump was busy trash-talking his remaining primary opponents, Clinton on Tuesday night looked beyond Sanders and focused on a message of party unification.

Clinton's main mention of Sanders was not to speak about him as a rival going forward, but to praise him and his supporters for "challenging us to get unaccountable money out of our politics and giving greater emphasis to closing the gap of inequality.""And I know together we will get that done," she added, another clear reference to the need to unify the party going forward.

She focused her attention on Republicans, calling them the party of the past and saying Democrats should be in the business of working toward the "future."

Clinton was aided Tuesday night by the same demographic strengths that have helped her notch victories over the last three months: she does especially well among older voters, African-American voters and women. In Maryland, for example -- where African-American voters made up almost half of the Democratic primary electorate -- Clinton defeated Sanders by 30 points.

Her campaign was also helped by the fact that all but one of Tuesday's primaries were strictly closed primaries, meaning only registered Democrats (and not independents) could cast their votes. In the past, Sanders has typically done very well among independents, but closed primaries like this week's -- and New York's last Tuesday -- have proven tougher terrain.Earlier this week, Clinton released an ad, "Love and Kindness," which was clearly aimed at party unity as well. "Let's protect each other. Let's support each other," the ad said. "Let's stand together."

Still, Sanders showed no signs of slowing down, saying in a statement that he is "in this race until the last vote is cast." He did, however, put more of an emphasis on his role in shaping the Democratic agenda, rather than his intention to win the nomination.

"The people in every state in this country should have the right to determine who they want as president and what the agenda of the Democratic Party should be," he said, noting that the campaign is "going to the Democratic National Convention in Philadelphia with as many delegates as possible" to fight for his key issues, like a $15 minimum wage, Wall Street reform and tuition-free college.

Sanders also blasted the closed primary system, noting that his "resounding victory" in Rhode Island was a result of the state's "open primary where independents had a say in the outcome." "Democrats should recognize that the ticket with the best chance of winning this November must attract support from independents as well as Democrats," he said. "I am proud of my campaign's record in that regard."It was a strong night for the Democratic establishment in Senate races as well. Both candidates backed by the national Democratic party: Chris Van Hollen in Maryland, and Katie McGinty in Pennsylvania won their respective competitive primaries and will advance to the general election. Pennsylvania, in particular, was seen as a high-stakes primary for Democrats: the see that race, against incumbent GOP Sen. Pat Toomey, as one of their top pickup opportunities in the fall, especially if Trump is the nominee.