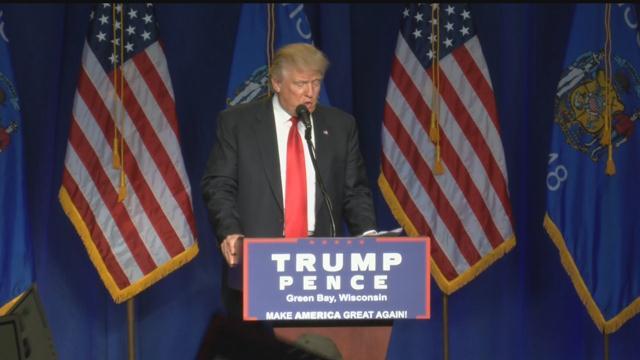 In his first visit to Wisconsin since April's Primary, Donald Trump officially endorse Speaker of the House Paul Ryan who's seeking re-election in next Tuesday's primary.

"In our shared mission to make America great again, I support and endorse our Speaker of the House Paul Ryan," said Trump who seemed to be reading from a script on the podium.

Some in the crowd found it exciting to hear that for the first time.

Others said they were surprised given Ryan's reluctance to endorse Trump right away.

Referring to a script again, Trump then read an endorsement for Arizona Senator John McCain, who he had earlier criticized for not doing enough of behalf of veterans.

"And I fully support and endorse his re-election," said Trump. "It's  very important."

He talks about teaming up with Russia to defeat terrorist group ISIS while strengthening U.S. boarder and lowering taxes on people and business.

Milwaukee County Sheriff David Clarke, who has told CBS 58 News in the past he would look forward to an opportunity to serve in Homeland Security in a Trump Administration, was in Green Bay and spoke to the crowd before Trump.

Congressman Ryan spoke before a crowd at Relay for Life in Kenosha.

Senator Ron Johnson and Governor Scott Walker also said they had prior commitments to keep and did not attend the Trump rally.