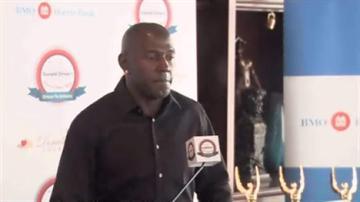 MILWAUKEE-Green Bay Packers legend Donald Driver is known for his wide smile, but on Friday while honoring local volunteers he was close to breaking down.

The tender moment came while the Packer's all time leading receiver congratulated recipients of his \"Driven to Achieve\" awards.

They represent all forms of charitable endeavors from granting wished to the terminally ill to teaching people to read.

\"My best friend, my father, died of cancer within the last three years so I see that. My brothers and sisters couldn't read above the third grade level...\" that's when Driver's voice began to tremble and he paused to composed himself.

\"So when you see these things it makes your fight and continue to fight and give them an opportunity. Someone gave me an opportunity and if I don't do it then I feel like I'm wasting my time on this earth.\"

Then with that dazzling charm he turned a joke as someone approached him with something to dab his eyes.

The room at the downtown Pfister hotel erupted with laughter.

BMO Harris Bank partnered with Driver to grant more than $200,000 to several charities.

It was a joyful event that included Anthony Robles who with one leg went on to become a champion college wrestler.

Robles and Driver are often text each other and are hoping to get out the message that through service to others comes the greatest reward.

Laura Ziemer, Founder and Commissioner of The Miracle League of the Lakeshore and 2014 Driven to Achieve Award recipient.