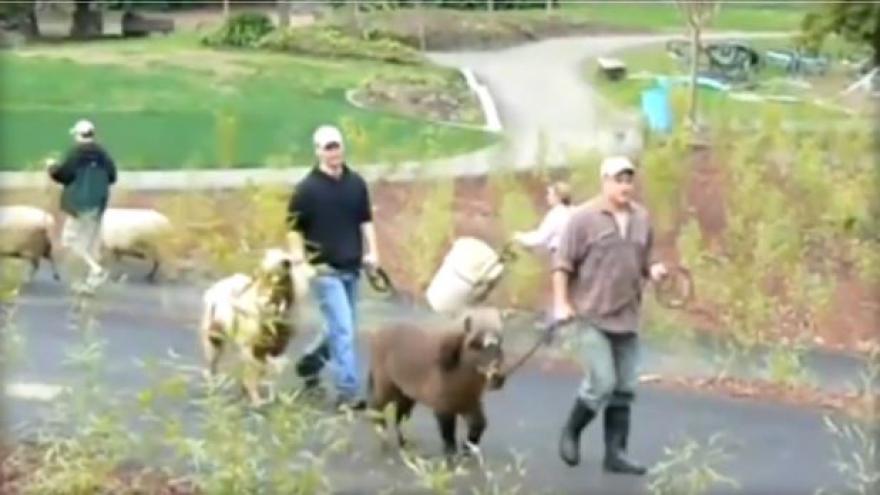 SAN JOSE, Calif. (CBS News) -- Workers at a children's zoo in San Jose are mourning the loss of several miniature horses and a donkey killed in two mauling attacks in recent weeks. A pack of determined dogs was found to be responsible, CBS SF Bay Area reports.

The Happy Hollow Park and Zoo has been a part of what is now known as Kelley Park in San Jose since the early 1960s. The dog attacks that left the animals dead have hit the zoo staff members and regular visitors hard.

"It's been a tremendous loss to the whole staff -- particularly for the zoo staff who work most closely with those animals. And it's hit our community as well," said Happy Hollow Zoo Director Valerie Regal.

The zoo's four miniature horses had lived happily at Happy Hollow for decades until the first mauling on January 15. A horse named "Sweet William" was killed in that attack.

The zoo was able to identify the attackers, but could not catch the dogs.

"We looked at our security camera footage and figured out that there were three domestic dogs inside the zoo that night," said Regal.

Zoo staff moved the three remaining horses and a donkey to a different enclosure, confident they would be protected by a six-foot chain link fence. But on January 20, to their horror, staff members discovered the dogs had found a way back in, digging under the fence line.

This time, the zoo was able catch the two biggest dogs, but only after they'd suffered a heavy loss with the deaths of three more miniature horses and a Sicilian donkey.

"Those animals touched a lot of lives. They're really going to be missed. So our sympathies go out to everybody," said Regal.

The first dog was found in the same pen where the miniature horses were kept. Animal Control authorities said there was no question the dog was one of the animals involved in the mauling.

The second dog was captured three days after the attack in the general vicinity. Authorities believe it to be one of the dogs seen in the surveillance video.

One smaller dog, likely a Chihuahua, is still loose, but is not considered a threat to other zoo animals. An Animal Control official in San Jose said the two dogs would probably have to be put down.

So far, no owner has stepped forward to claim the two dogs that were caught.