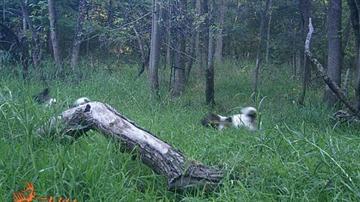 VILLAGE OF CALEDONIA-Police are alerting the public about two dogs suspected of attacking another dog.

Police posted a photo of the two dogs that was taken by a trail camera.

The dogs are suspected of  a 13 year old Basset Hound in a yard at 3423 Killips Lane near the intersection of N. Green Bay Rod and Three Mile Road back on September 22nd.

CBS 58 News has also learned they might have gone after a Scottish Terrier as well.

Police say they think the dogs are Akitas.

The Basset Hound named Freddy was attacked and mauled.

His left side was badly hurt and medical expenses to treat him have already climbed to more than $1,500.

CBS 58's Lila Carrera reports that the dogs' owners were cited and claim to no longer have the pets.

But at least one neighbor tells Carrera she saw the dogs around only a couple of days ago.