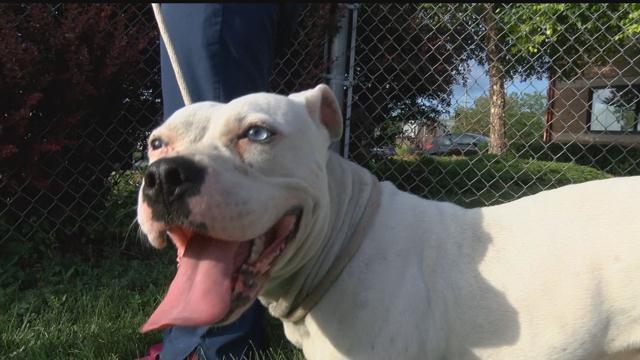 His face tugged at our heartstrings, the cast on his leg that took a bullet is heartbreaking.

Nobody knows for sure, but a mild mannered pit bull quite possibly was mistaken for a mountain line near 21st and Chambers.

He's lucky to have survived and is now being cared for by MADACC.

Karen Sparapani from the animal control shelter was a live guest Thursday on the CBS 58 News at 4:30 p.m.

The image of what looks like a mountain lion captured on cell phone video Monday along the 200 block of Garfield Street has brought attention to the dangers of people firing their guns.

But Sparapani revealed that they've seen shot dogs plenty of times before. Just this week, another dog came into the shelter after being shot in the face.

While some have nicknamed the wounded dog that was caught up on the mountain lion furor \"Simba,\" MADACC wants it known that they did not choose the nickname. They are calling him Pete for now.

It appears he will need surgery. Total recovery time could take two to three months.

\"We're trying to caution people to not use firearms. If you think you see the lion, go inside and use the phone. Don't use a gun.\"

MADACC says on Thursday it received no calls about a possible sighting.

Since the cell phone video was first taken on Monday, Milwaukee Police report two dozens reports, but no evidence that a mountain lion was at any of the locations. All were on the north side of Milwaukee.

One person had indicated the dog might be theirs. But they haven't heard from that person since.

Pete will then be transferred to another agency, a local rescue, while he is treated for his wound.

MADACC says it will post on its website the minute Pete is transferred to another agency in case anyone is interested in off setting the costs for his medical care or possibly adopting him.