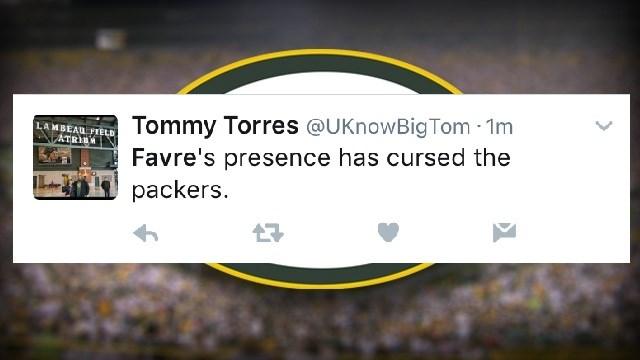 It's been a rough game for the Green Bay Packers and the presence of Brett Favre at Sunday's game has some fans questioning if a Favre Curse has evolved.

The Packers lost to the Cowboys Sunday 30-16 which is the worst loss at home with Aaron Rodgers as the starting quarterback.

Packers fans at Lambeau could be heard audibly booing the Packers at multiple times throughout Sunday's game.

Favre isn't allowed to come to Lambeau during game days anymore. We always play like crap.

last year, when the Packers retired Brett Favres number, they lost
today they put Favre in the Packers HOF, lost

The last time Brett Favre was at Lambeau was for last year's Thanksgiving Game the Packers also lost. Favre was there for a ceremony retiring his number.

Apparently everytime the Packers try to honor Brett Favre, it ends poorly for them

Every time Favre comes back we lose.

What do you think? Is Brett Favre's presence to blame for the Packers disappointing game or is there another reason for the Packers struggles? Let us know on Facebook and Twitter.