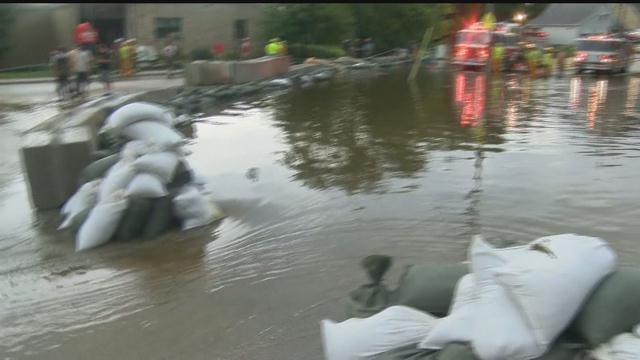 Kyle Wilson can only watch from a safe distance as the flood gave him waterfront property.

"Basically it looked like like Michigan and there was water coming in the basement," he told CBS 58's Eric Levy Wednesday night.

Sandbags became a hot commodity in Dodge County with some communities recording between five and seven inches of rain.

Dump truck loads of sand were brought in to put into the green burlap sacks at properties throughout Mayville.

Many of the volunteers working long hours.

"That's what Mayville is all about you know," said Laurie Benter. "We all pulled together whenever we have to and they're all here for us."

A touch of sunshine through the ominous clouds in the late evening offered a glimmer of hope that the rain will stop in the flooding will go away.

"I think we will be able to deal with it," Benter added. "I mean, it's something we've got to deal with, it's mother nature. You can't stop her."

There was more light rain during the late afternoon and evening.

Though it doesn't appear to be enough to make the situation worse.

Meantime, the sandbags and cement blocks will hopefully direct the water out of town.