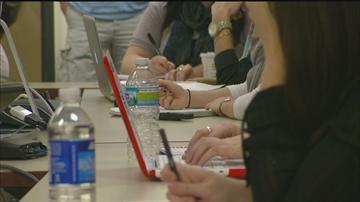 MILWAUKEE -- Most college students just got back into the classroom in the last week or so and spending time getting acquainted with new classmates, professors and syllabi, figuring out how to pay for college might not be top of mind.  But Milwaukee leaders hope a documentary film debut in the city Monday night will bring the issue up.

Director Andrew Rossi will meet with Mayor Tom Barrett, members of One Wisconsin Now and several recent grads Monday afternoon to talk about the issue at MATC's downtown campus.

CNN Money reports two out of every three college grads in Wisconsin will end up with student loan debt to go along with their diploma.  That same report shows the average Wisconsin graduate will need to pay back more than $28,000.

\"We reformed a student loan system so that more money goes to students instead of big banks,\" the President said.  \"We expanded grants and college tax credits for students and families. We took action to offer millions of students a chance to cap their student loan payments at 10 percent of their income.

Rossi's documentary, \"Ivory Tower\" will premiere Monday at the Downer Theater in Milwaukee at 7 p.m.