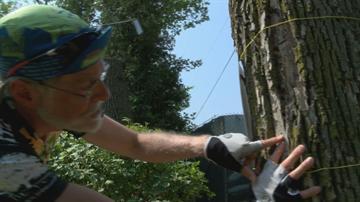 WEST ALLIS -- Dick Rideout knows just how to spot the fingerprint of a destructive bug eating trees left and right.

\"This has the potential of knocking out one fifth of our urban forest,\" Rideout said.

The DNR specialist brought his expertise to State Fair Park Saturday.  It's there where a boy spotted damage from the emerald ash borer last year.

\"We take for granted because the trees are there, but when we lose them, that's when things start to happen,\" Rideout said.

The boy's discovery came too late.  The DNR lost 16 State Fair trees in its nature preserve.  Rideout says 20 percent of all trees in Wisconsin are ash, meaning one could very well be right outside your  door and maybe not for long.

\"As soon as you lose the tree in your yard, your heating and cooling bills are going to skyrocket,\" Rideout said.  \"Your turf is going to brown up.\"

More than 20 southern Wisconsin counties are already quarantined, but all hope isn't lost.

The DNR called in Jeff Palmer, with Arborjet Tree Injection, to treat ash trees on the park grounds.

\"Literally, it's going to kill every single ash tree it comes in contact with unless that tree is treated,\" Palmer said.

Palmer drills small holes in the base of the tree, then hooks up hoses to inject protective fluid.

Arborjet is donating ten years of treatments to the DNR for trees on the State Fair Grounds.  Palmer will come back every few years to administer the treatments.  The DNR hopes fairgoers see how they can save trees of their own.

\"Your tree is part of the urban forest, part of the community's forest and you play a part in protecting the benefits that's provided to the whole community,\" Rideout said.