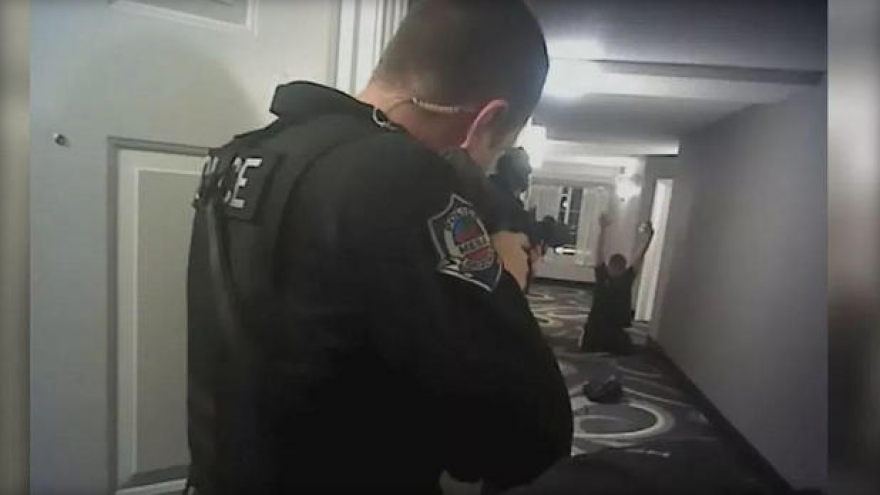 MESA -- Police in Mesa, Arizona released disturbing body camera video on Thursday hours after a former officer was acquitted of a murder charge in the fatal shooting of an unarmed man.

The verdict cleared Philip Brailsford, 27, of criminal liability in the 2016 death of Daniel Shaver, of Granbury, Texas. He was also found not guilty of reckless manslaughter, reports CBS Phoenix affiliate KPHO-TV.

The shooting occurred at a hotel in the Phoenix suburb where officers responded to a report of someone pointing a gun out of a window. The video, obtained by KPHO, shows Brailsford pointing a gun at Shaver as Shaver lies on the ground, holds his hands in the air, cries and begs the officer not to shoot.

Brailsford then orders the woman to kneel, put her hands in the air and crawl towards officers. Officers then apparently handcuff her out of the view of the camera.

Brailsford then orders Shaver to kneel, and yells for him to keep his legs crossed, to which Shaver replies, "I'm sorry."

Shaver is then seen putting his hands behind his back. The officer yells, "Hands up in the air!," and Shaver complies.

"You do that again we're shooting you, do you understand?" the officer says.

"Please, do not shoot me," Shaver is heard saying, his hands in the air.

"Then listen to my instructions!" the officer yells.

"I'm trying to just do what you say," Shaver says.

"Don't talk! Listen!" Brailsford yells. He orders Shaver to keep his hands up.

"Your hands go back in the small of your back or down, we are going to shoot you, do you understand me?" Brailsford yells.

The detective investigating the shooting had agreed Shaver's movement was similar to reaching for a pistol, but has said it also looked as though Shaver was pulling up his loose-fitting basketball shorts that had fallen down as he was ordered to crawl toward officers.

The investigator noted he did not see anything that would have prevented officers from simply handcuffing Shaver as he was on the floor.

During the trial, Brailsford testified that he believed 100 percent that Shaver was reaching for a gun and that if in the same situation again, he would make the same decision, KPHO says.

While no gun was found on Shaver's body, two pellet rifles related to his pest-control job were later found in his room.

Brailsford's attorney Michael Piccarreta put an arm around his client after the verdict was read.

"There are no winners in this case, but Mitch Brailsford had to make a split-second decision on a situation that he was trained to recognize as someone drawing a weapon and had one second to react," Piccarreta said. "He didn't want to harm Mr. Shaver... The circumstances that night that were presented led him to conclude that he was in danger. Try to make a decision in one second, life or death. It's pretty hard."

Piccarreta also said he wasn't sure his client would be interested in trying to get his police job back.

Shaver's widow, Laney Sweet, and Shaver's parents have filed wrongful-death lawsuits against the city of Mesa over the shooting death.

During his trial testimony, Brailsford described the stress that he faced in responding to the call and his split-second decision to shoot Shaver.

Brailsford told jurors that he was terrified for the safety of officers and a woman who was in the hallway. He also said he felt "incredibly sad" for Shaver.

Brailsford served as a Mesa officer for about two years before he was fired for violations of departmental policy, including unsatisfactory performance.

He is one of the few police officers in the U.S. to be charged with murder for shooting someone while on duty.

The shooting occurred as police departments across the U.S. became focal points of protests over deadly encounters with law enforcement.