DiCaprio, Netflix team up to showcase film about endangered gorillas 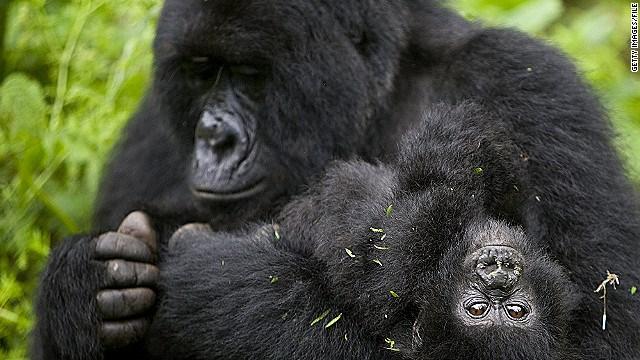 What do you get when you combine gorillas, Leonard DiCaprio and Netflix?

A hit, the media company hopes.

Netflix announced Friday that it will team up with DiCaprio -- who it described as a \"an actor, producer and philanthropist\" -- to distribute a documentary film entitled \"VIRUNGA,\" about the quest to save endangered mountain gorillas in the eastern Congo park by that name.

\"With VIRUNGA, we'll work with Leo to introduce viewers around the world to an incredible, gripping story that will have audiences guessing right up until the final act,\" said Ted Sarandos, Netflix's chief content officer.

The fact Netflix is getting behind a high-profile production is nothing new. After all, it has produced the critically acclaimed series \"House of Cards\" and \"Orange is the New Black,\" not to mention the reboot of \"Arrested Development.\"

But what makes this unique is that it's a film, not a series, and it will come out in theaters in New York and Los Angeles on November 7. That's the same day \"VIRUNGA,\" which is directed by Orlando von Einsiedel, will roll out on Netflix as well.

According to its website, the film chronicles how a \"a small and embattled team of park rangers -- including an ex-child soldier turned ranger, a carer of orphan gorillas and a Belgian conservationist -- protect (Virunga National Park) from armed militia, poachers and the dark forces struggling to control Congo's rich natural resources.\"

\"VIRUNGA\" hasn't been distributed widely, but it has racked up a number of awards from the likes of the Tribeca Film Festival, DOXA and American Film Institute.

DiCaprio, its executive producer, called the partnership with Netflix \"an exciting opportunity to inform and inspire individuals to engage on this topic.\"

\"Films like VIRUNGA are powerful stories that are a window into the incredible cultural and natural diversity of our world, the forces that are threatening to destroy it, and the people who are fighting to protect it,\" the actor added.

Mountain gorillas are a subspecies of the eastern gorilla discovered in 1902 and imperiled in recent days by war, hunting, disease and other threats. There are a little less than 800 of them in the wild now, according to the World Wildlife Fund, about half of those in the Virunga Mountains bordering the Democratic Republic of Congo, Rwanda and Uganda.

A child actor who broke through on the sitcom \"Growing Pains\" and became an international sensation after the film \"Titanic,\" DiCaprio is one of Hollywood's most respected and bankable actors. From the 1990s through today, he has starred in such films as \"Gangs of New York,\" \"The Aviator,\" \"Catch Me If You Can\" and more recently \"The Wolf of Wall Street.\"

He has also developed a reputation, and tried to break ground, outside the cinematic world. He is an activist on issues ranging from protecting elephants and tigers to safeguarding habitats in the Pacific and Arctic Oceans and climate change. He made remarks at a United Nations summit last month on that subject.

In September, the Clinton Global Initiative, an effort led by former U.S. President Bill Clinton, gave DiCaprio one of its \"Global Citizen\" awards.

\"Through grantmaking, public campaigns and media projects, DiCaprio has worked to bring much-needed attention and funding to three focus areas---protecting biodiversity, ocean and forest conservation, and climate change,\" that organization says on its website. \"... DiCaprio uses digital media to inform and inspire the public, offering them ways to take action on an array of issues---from protecting sharks in California and elephants in Africa to supporting the transition of our society to clean, renewable energy.\"