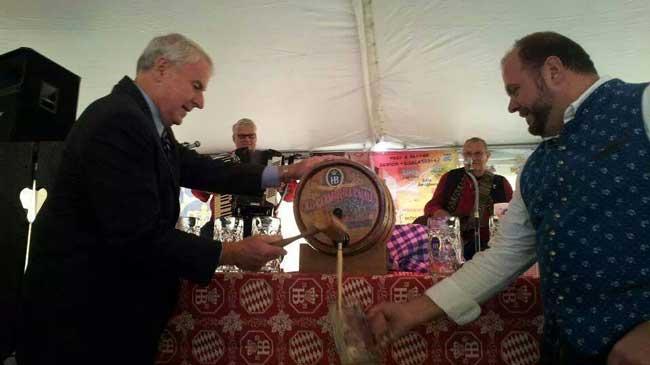 From September 29 through October 2, the Marcus Center Grounds and Pere Marquette Park will transform downtown Milwaukee into a traditional Bavarian Oktoberfest celebration activating both sides of the Milwaukee River with beer gardens, music and food.

In 1810, King Ludwig I of Bavaria proclaimed that the last sixteen days of September, ending with the first full weekend in October, shall be set aside for feasting and beer drinking to celebrate his upcoming wedding.  To celebrate this tradition, the Marcus Center for the Performing Arts, The Old German Beer Hall, Westown Association, Sazama’s Fine Catering, OnMilwaukee.com, and Milwaukee County Parks will team up for the second year to celebrate a Bavarian style Oktoberfest at both the Marcus Center Grounds and in Pere Marquette Park. This event is free admission and is family friendly.

An authentic festival tent and beer garden will be erected in Pere Marquette Park.  Hofbräu Oktoberfest Beer, the original beer of King Ludwig’s Royal Brewery, will be featured, along with traditional Bavarian foods including giant fresh baked pretzels, bratwurst, wieners and Schnitzel.

The Marcus Center Grounds will feature food and beverage by Sazama’s Fine Catering at the Sazama’s River’s Edge Patio. Featured beer on the Marcus Center Grounds will include Hacker-Pschorr (Weisse and Oktoberfest) as well as Paulaner Oktoberfest. Dinner specials will include a Friday Fish Fry, Spanferkel on Saturday with a German Breakfast on Sunday morning starting at 10:00 am. Other concessions include Saz’s pulled pork or chicken sandwiches, grilled jumbo brats on pretzel rolls, chicken schnitzel sandwiches and much more. The full menu is available at: mkeoktoberfest.com/food.

In addition to the dinners, the Marcus Center will be offering some special events throughout the weekend. Events include an MKE Oktoberfest Market on Saturday plus a Harvest Mass on Sunday featuring Father Mike Hammer with music from the Mike Schneider Band. Also this year, Brew City MKE: Craft, Culture, Community, the Milwaukee County Historical Society's major 2016 exhibition, explores Milwaukee's culture of beer and brewing will be on display on the Marcus Center grounds each day. Brew City MKE is the first exhibition of its kind, and features rarely-seen artifacts and images that tell the story of how Milwaukee became the beer capital of the United States. More info on these events is available at: mkeoktoberfest.com.

Keg tapping will take place at Pere Marquette Park on Thursday, September 29 at 4:30 pm.   Music and entertainment also will take place throughout the festival weekend at both locations.

Full dates and times of musical entertainment is available at: mkeoktoberfest.com.

All guests at Oktoberfest must be 21 or be accompanied by an adult. All guests over 21 will be issued a wristband.

For more information on the Oktoberfest event, to see a schedule of events and more, please visit the official website- MKEOktoberfest.com