Deputy squad car struck while responding to another accident 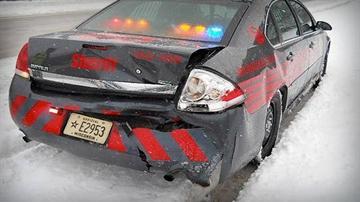 MILWAUKEE-There were several crashes on the freeway system Sunday, including one that sent a sheriff's deputy to the hospital.

According to the Milwaukee County Sheriff's Office, there were 26 property damage between midnight and 6 p.m.

The snowy weather is blamed as a contributing factor for several of the crashes and traffic back ups. It was around 10:30 a.m. Sunday that a squad car responding to an accident on I-94 was struck from behind.

The deputy suffered a head and neck injury and was treated and release from the hospital.