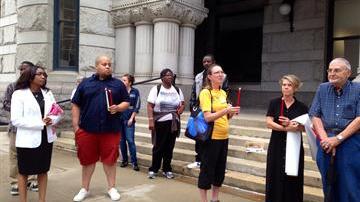 \"From Ferguson to Milwaukee and across the U.S., the devaluation of Black life is widespread and at epidemic levels,\" Coggs said in a lengthy statement announcing the demonstration.

\"Whether it is white police officers in Ferguson or Black men on 15th & Atkinson in Milwaukee, the senseless and violent end for too many young Black souls continues on.  The outrage, anger, hurt and pain that is felt with any senseless loss of life is present regardless of the race or the occupation of the offender.  However, it is particularly troubling - and polarizing - when those entrusted to protect and serve the public are the ones who have taken a life.\"

While the fatal shooting of 18 year old African-American Mike Brown in Ferguson, MO has sparked demonstrations nationwide, Coggs has raised some eyebrows with her declaration that \"Milwaukee  is just a death or two away from being Ferguson.\".