Demonstrators are Concerned Over the Public Safety Action Plan 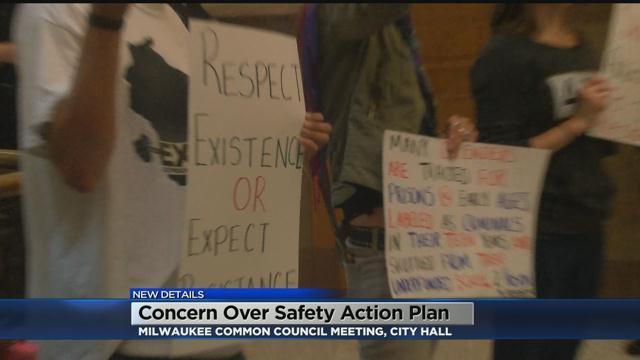 Milwaukee's Common Council has not yet voted on a new public safety action plan for the city.

That didn't stop a local group from making their voices heard about the issue at a meeting this morning.

Thursday’s city council meeting was interrupted by protestors more than once.

Two different groups showed up one dressed all in black, refusing to be quiet.

One of the men with that group said the injustices facing parts of the community need to stop, calling his protest a warning.

Another group, UBlack, which stands for uplifting black liberation and community, brought about 25 people.

They held up signs and booed several of the aldermen that were present, especially the chair of the Public Safety Committee Bob Donovan.

Afterwards, they marched to the Mayor’s office where they stood outside yelling things like "we want justice!"

One of the protesters said she is disgusted the public safety committee's proposed plan, and that adding more police officers doesn't make her feel safe.

“280 police officers being added to the force? With no mentions of job creation? With no talking to the community? We are tired of people deciding what we want and what we think we need,” said protestor.

During the meeting, Bob Donovan said was appalled at the way the group came in to today's meeting to speak out of turn, calling it unprecedented and out of order.

Alderman Donovan's office after the meeting said he went into a meeting right now discussing what just happened in there.