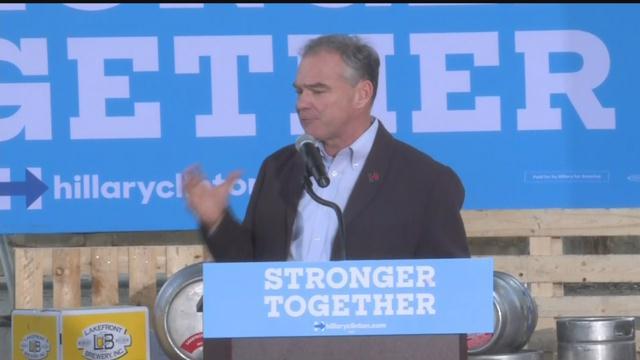 Wisconsin at the epicenter of the 2016 presidential campaign once again.

Both the Democrats and Republicans are represented on this first Friday in August.

Sen. Kaine took a quick brewery tour, learned about the fish fry, but once he got on stage-he pretty much jumped right in to talking agout job creation

Kaine says in the first 100 days of a Clinton presidency, they will make the biggest investment in job creation since World War II.

It will include improving infrastructure, raising the minimum wage, making college more affordable and ensuring everyone benefits from economic growth.

He called Clinton the your hired President, and Donald Trump the your fired president.

Kaine said Trump doesn't have details about how he'll accomplish the things he promises.

“How do we share prosperity? We do it through profit sharing, so companies share their upside, companies like this that have a good track record of sharing their upside, we do that with not letting companies get tax breaks for shipping jobs overseas,” said Kaine.

Though he went after Trump, we heard little mention of Trump's runningmate Gov. Mike Pence.