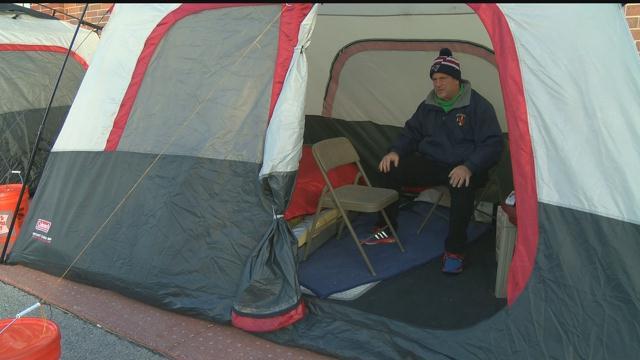 We are still days away from Black Friday but some Wisconsin shoppers are already camping out to be first in line for the sales.

CBS 58's Jacob Kittilstad caught up with the group of about five people setting up their tents outside of the Best Buy in Delafield.

The people have actually been in line since last Thursday: a full week before Black Friday. But this group is not new to this. Their set-up is the tip-off.

Michael Frankie brags about the new generator their using this year: "$119 at Home Depot," he said - a purchase made last Black Friday.

Now its hum is heard in the parking lot of the Delafield Best Buy.

"Like I said, we met out here ten years ago. We were on the back end of the building sitting underneath an umbrella next to each other waiting for the sale in the rain," Frankie said.

"When we first came out here the motivation was to save money. Now, it is still to save money and we do. But it's just as important that we come out here for the comradery and the good times together. Like I said, we take vacation to come out here and spend this time together," Frankie said.

Taylor Fotuski is the 17-year-old daughter of one of the line-waiters. She remembers pushing carts around different Best Buys as a young girl, going back as far as the Black Fridays she can still remember.

But she concedes: this isn't normal for most families.

"I haven't really came out about it until this year. I told my friend 'Guess what my dad's doing this week.' And she's like 'What?' And I'm like 'Yeah, he's setting up a week before Black Friday in a tent with his friends'. And they all just think it's funny," Fotuski said.

Frankie is looking to get a new TV come Friday. He also says comfortable in their tent even if other customers judge him for it. In fact, it has strengthened the bond of the tent families who sometimes even meet tent-free.

"I mean, we get together 3-4 times during the year and do things besides this," Frankie said.

If you are wondering, yes, these people say they do have jobs. Frankie said he works for the state. Another woman said she's an x-ray technician.

They say they are taking vacation days to participate.