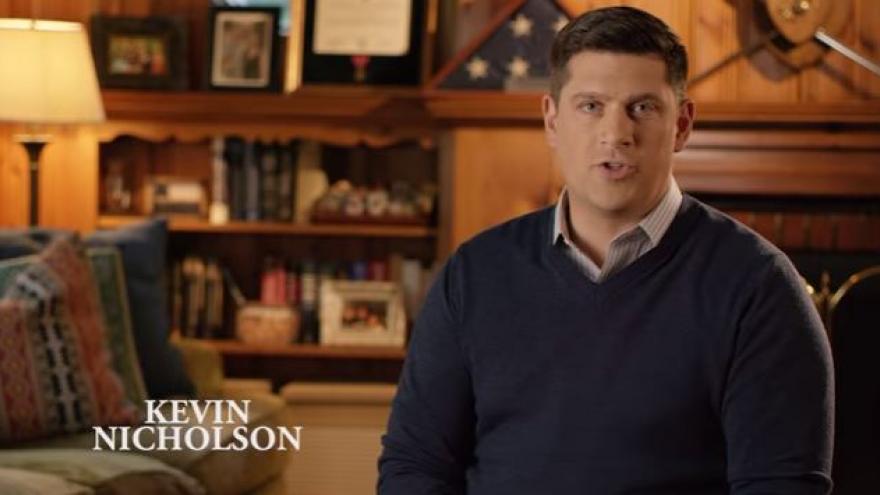 (AP) — A former Marine and past president of a national college Democratic group has launched a Republican bid for the U.S. Senate in Wisconsin, becoming the first GOP challenger to Democratic Sen. Tammy Baldwin.

Kevin Nicholson referred to his Democratic past in his campaign launch video posted online Wednesday, while also taking swipes at Baldwin as she prepares to run for re-election for the first time next year.

Nicholson, 39, was long expected to get into the race, his first for public office. One of his potential primary challengers, Republican state Sen. Leah Vukmir, questioned Nicholson's conservative credentials while saying she's still undecided about getting in the race.

"I believe that there's a track record with me, people know my conservative past," said Vukmir, who has been in the Wisconsin Legislature since 2003. "I'm not familiar with Kevin's conservative track record at this point, other than him saying he's a conservative."

Nicholson, of Delafield, emphasized his military past — his 100 combat missions, a Bronze Star — during a three-minute video where he cast himself as a "conservative outsider." He touted his positions against abortion and in support of 2nd Amendment gun rights, term limits and school choice.

"Tammy Baldwin is a disaster on national security," Nicholson said in the video, without citing any reasons why. "She's dead wrong on the economy. She's liberal, divisive and honestly, just embarrassing. To me, Baldwin represents everything wrong with Washington."

Uline Corp. founder Richard Uihlein, who lives in Illinois, has given $2 million to a political action committee created to back Nicholson. That PAC has raised $3.5 million to date for his candidacy.

Wisconsin Democratic Party spokeswoman Gillian Drummond said Nicholson was "only out for himself" and can't be trusted, adding: "Worse, Kevin's in the pocket of an out-of-state billionaire whose money he'll rely on to bankroll his campaign."

Nicholson has been trying to win over Republicans, making the rounds on conservative talk radio to address questions about his Democratic past. Nicholson was the national president of the College Democrats of America and spoke in favor of Al Gore at the 2000 national convention. Nicholson said his migration to the Republican Party began in 2000 and was complete by 2007.

Voting records show that he registered as a Democrat in 2005 and cast a ballot in the 2008 Democratic presidential primary and general election while living in North Carolina. Nicholson has said he voted for Republican John McCain in the general election.

Nicholson said in the video that he was a Democrat in his "younger days" when he used to "do nothing and know everything." But he said that after having children, fighting in two wars and working at businesses around the world, "you cannot help but become a strong conservative."

Nicholson is married with three children and works at the management consulting firm ghSMART.

Along with Vukmir, other Republicans considering getting into the race are state Sen. Scott Fitzgerald, state Rep. Dale Kooyenga and Madison businessman Eric Hovde. Fitzgerald, Kooyenga and Hovde did not immediately return messages. Hovde said on Monday that he hoped to make a decision sometime after August.