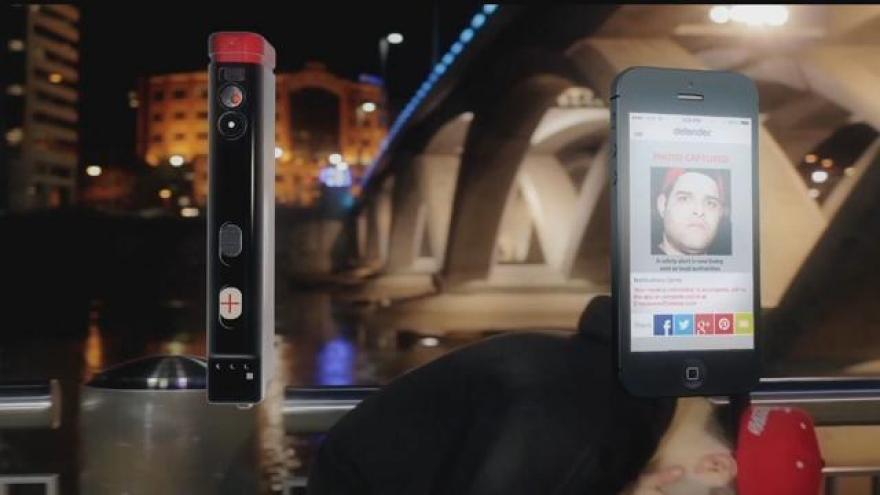 It's rare that an ad for a product that hasn't been released yet goes viral, but the co-founder of the "Defender 24/7" says the product has 40-million views on Facebook alone. Defender 24/7 is pepper spray that will also take a picture of your attacker, and call for help.

Pepper spray, camera, GPS, siren, all in one. To do this, the Defender 24/7 has some technology built in, and links with your smartphone.

Ryan McManus, Chief Marketing Officer for the Defender 24/7 says that when the pepper spray is deployed, it works just like your home security system. "we grab your GPS coordinates, and the photo of your attacker, and via the data connection on your phone send it it to our central station, which is able to dispatch help to your exact location anywhere in the US," he said.

It is available for pre-order now, set for release in early 2017. But before you put down your cash, we spoke with a security expert about it. Pablo Velazquez with Genesis Group has three decades of security experience, more than a dozen certifications, and teaches classes on the proper use of pepper spray.

Velazquez does have concerns. He wonders if gripping the canister properly will cover up the camera and flash. He also wonders how effective calling for help will be, since the average response time for a 9-1-1 can be ten minutes, and Velazquez says "the average encounter where one would use pepper spray is 90-seconds."

McManus says Defender 24/7 designers have moved the camera and flash, and promises that it will be intuitive to use. "We've changed the casing, the camera is actually at the bottom of the device now," he said.

But Velazquez says the canister still leaves room for error. He thinks that under the stress of potential bodily harm, people could still cover the camera in the heat of the moment. That's why he recommends that anyone who uses any kind of pepper spray take a class to learn how to use it effectively. "Without stress inoculation, anything you train for will not work under stress," Velazquez said.

When we watched students at a Genesis Group pepper spray class, we saw something that seemed to make Velazquez's point. A student who already had taken the classroom portion of the pepper spray training was holding his off-hand out in front of his body.  So far in front that when he fired the spray, it was possible that the stream could bounce off his hand and deflect back at his own face. It's a mistake that trainers corrected right away.

Which is why Velazquez likes the idea of the product "the concept (for Defender 24/7) is a great concept, " but also thinks technology has not advanced enough to take the place of training, "you must take a class... training can be four hours to use pepper spray effectively."

Bottom line for McManus: pepper spray could be right for you, and Defender 24/7 takes pepper spray into the 21st century. "The user needs to complete one simple action to have complete personal security," he said.