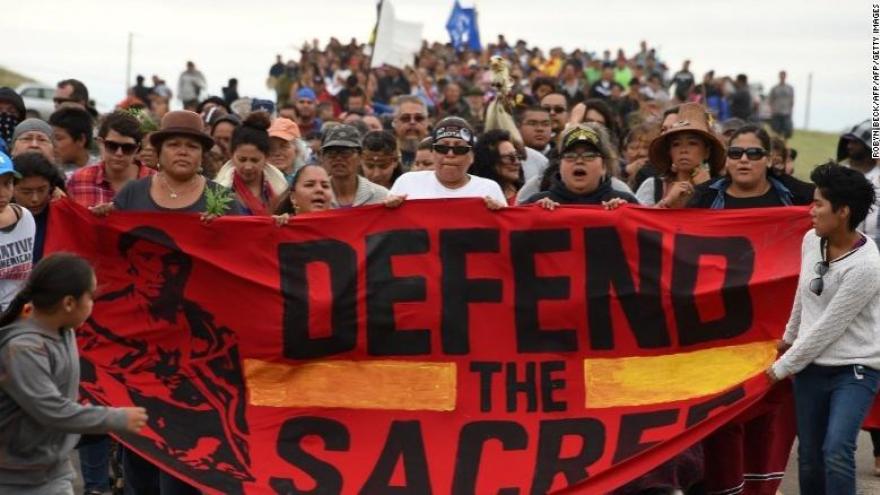 Last week, Gov. Doug Burgum signed an emergency evacuation order of the property to allow private contractors to remove waste from the Oceti Sakowin camp area, which officials say is in floodplain. Burgum's order comes as the project moves closer to completion after the US Army Corps of Engineers recently granted an easement for the last stretch of the 1,172-mile-long pipeline bitterly opposed by Native Americans and environmentalists.

The day before the deadline, nearly all the yurts were gone at the Oceti Sakowin camp. Some teepees were stripped to the poles and the landscape was a muddy mess, with heaps of trash in some areas. Many protesters have left but a select few who refused to budge said they don't believe the fight is over.

"I'm not going anywhere. I carry a knife with me all the time. But I am handing that over so that I have no weapons on me. I will stay and pray even if they come to remove us," Valerie Armstrong, 36, of Sherman, Texas, said Tuesday.

Instead of leaving, Armstrong was busy building a tiny wooden house.The Oceti camp was the main camp closest to where the controversial pipeline will go underneath the Missouri River. At the peak of protests, the camp's population climbed to as many as 10,000 people. A couple hundred remained Tuesday as heavy equipment hauled away materials. Some campers also helped to clean up.

"I have no fear ... I am living in the purest form I can," Eric Wallace-Senft told CNN affiliate KFYR. "If they are people who want to harm me, then that's on them."

"There's obviously despair," Ellie Davis told the station. "There is like a deep sadness... This was beautiful what was built here."

North Dakota officials have strongly encouraged the remaining protesters to leave. Officials are offering buses to transport protesters to a transition center in Bismark, where they can receive medical evaluations, clean clothes, a hotel stay and bus fare home.

"Our goal is that everyone who wants to vacate the camps prior to 2 p.m. tomorrow has every resource available to do so," Levi Bachmeier a policy adviser to Burgum, said Tuesday.Morton County Sheriff's Office spokeswoman Maxine Herr told CNN: "Women, children, elderly and any other protesters that want to take the opportunity to leave the camp can do so at that time."

She added: "We are seeking to take the moral high ground and help them gracefully exit."

Kasto, who is a Native American from South Dakota, and her family packed up from the Oceti Sakowin camp. But Kasto said she would move to another camp inside the reservation.Some protesters seemed to be bracing for the worst.

Dean Dedman a member of the Dene Nation had both hands wrapped around a post hole digger trying to gouge out a hole in the frozen ground. Several other young men joined him, digging holes in a line across the tallest hill inside the Oceti Sakowin camp."We are building our fortress of solitude," Dedman said.

He said the barrier they were building was to keep sheriff's deputies, as well as the Department of Indian Affairs out.

"We are keeping out all the evil. If you want to talk about it in a spiritual way, its keeping out all the negativity," Dedman said.The $3.7 billion pipeline is slated to stretch through four states -- from North Dakota into South Dakota, winding through Iowa and ending in southern Illinois. It is expected to move 470,000 barrels of crude oil a day across the Midwest. The project is completed except for the contested portion under North Dakota's Lake Oahe, half a mile upstream from the Standing Rock Sioux tribe's reservation.The Standing Rock Sioux Tribe members are concerned the once-stalled project would affect its drinking water supply and place downstream communities at risk of contamination from potential oil spills.

Soon after, the Corps granted the easement. The move was enthusiastically greeted two weeks ago by Energy Partners, the pipeline's developer. The company has said it's ready to move proceed.

But the Standing Rock Tribe and its allies claimed then that the easement shouldn't have been granted without the issuance of an expected environmental impact statement or EIS for short.

Burgum's order to evacuate isn't the first mandate to leave the camp.

Last fall, protesters also vowed to stand their ground despite growing calls for them to leave. Then Gov. Jack Dalrymple ordered them to clear out immediately, citing the harsh winter conditions.

At the time, the Corps of Engineers also said activists who refused to leave could face arrest. Officials later backtracked, saying they had no plans to forcibly remove those who stayed.

Earlier this month, the US Army Corps of Engineers also ordered people to leave to prevent injuries and significant environmental damage in the event of flooding.