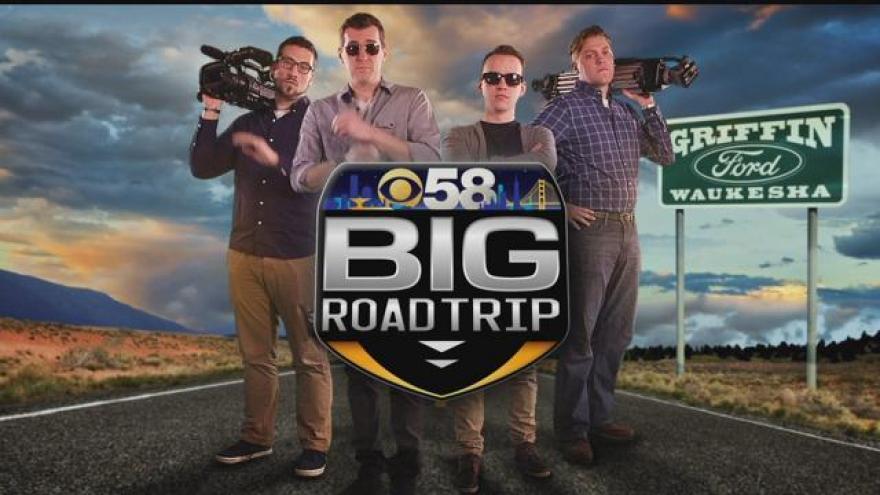 The CBS 58 Big Road Trip had a big day traveling across eastern Kansas. We gathered enough material for three news packages. (For those who aren’t familiar, a package is the typical long format story you see on the news, typically a minute and a half in length).

The first stop is a story you didn’t see tonight on CBS 58 News. We went to Baker University whose most famous alum is Packers head coach Mike McCarthy. McCarthy sported a sweet mustache as a student at Baker and played tight end for the Baker Wildcats. It’s almost hard to believe that someone who started his career as an NAIA student athlete would later turn into a Super Bowl winning coach. The road trip team talked to a few people at Baker including the current Baker head football coach who is good friends with McCarthy. McCarthy’s time at Baker is a story you will have to wait for since we are saving it for a different time during the road trip or possibly for the Super Bowl Special on CBS 58.

From Baker University we made the quick trip to Manhattan, Kansas. Sorry Kansas University fans (Marshanna Hester) we didn’t have time for a stop in Lawrence. Manhattan is the home of Kansas State University, the alma mater of another Packers great – Jordy Nelson.

Touring the Kansas State football stadium and locker room was incredible! For someone who went to a small D-1 school it was absolutely mind blowing seeing the amenities big college athletic programs give their students.

The Nelson Family Locker Room is extravagant to say the least. Not only does it have incredible player training facilities but it also boasts some enticing amenities including a barbershop, lounge space for athletes and a recovery pool which basically looks like a high class spa (at 45 degrees of course for athletes to recover). It almost felt like you were at a resort. In the words of Bill Walsh, “it is hard to imagine a high school student coming for a recruiting trip and not being blown away.”

Wisconsin rapidly embraced the Packers star receiver, but he is still a Kansas farm boy. You just have to hear from Kim Nelson as she talked about Jordy as a child, his emergence as a wide receiver in college and his transition to a real NFL star.

The road trip then trekked west to Hays, Kansas for our live reports on CBS 58 News.

Friday is a little bit more of a fun day with stops planned at a few tourist attractions in western Kansas (to be honest there’s really not much in the western half of the state). Ultimately the goal on Friday is Denver where we expect Super Bowl fever to be in full force!