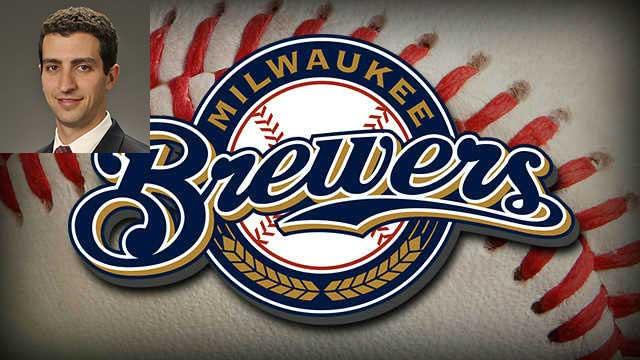 Stearns, 30, comes to the organization after serving three years with the Houston Astros as Assistant General Manager. In that role, Stearns has been a key member of the Astros management team focusing on all areas of the Astros baseball operations, including player development, scouting, administration, and analytics.

“David is a rising star in Major League Baseball and has been an integral part of the rebuilding of an Astros organization that has begun to reap the benefits of his efforts,” Attanasio said. “David’s philosophy and skill set are an ideal match for the Brewers. His proven leadership and diverse set of talents will position us to consistently compete for a World Series championship.”

The Astros have put together one of Major League Baseball’s most dramatic turnarounds in recent history, going from 51 wins in 2013 to 70 last season and now currently occupying an American League Wild Card playoff spot with 79 wins though Sunday.

Stearns said he was involved in the Astros / Brewers trade deal this summer.

Stearns said the trades were a positive step for the team.

"I am a big believer in not setting any limits for any team / any year," Stearn said.

He is the youngest GM in the majors.

"The fact that he was able to achieve that at a young age is only a testament of his work ethic and drive, " said Mark Attanasio.

Doug Melvin announced in August that he was stepping down after 13 seasons.

When Melvin announced stepping down, the team said it would look for younger candidates with knowledge of analytics.

“This has been a position that I coveted for numerous reasons,” Stearns said. “First, I’m excited to continue building on what I believe is already a solid foundation of young talent with the Brewers, particularly in the Minor League system. And as someone coming from the outside, I’m impressed with the strong relationship between the community and the Club. The fan support is incredible, and I know that they will be behind us as we create something special here. I want to thank Mark Attanasio for bringing me on board, and appreciate all of the hard work that has been done by Doug Melvin and everyone at the Brewers to make this such a special opportunity.”

Prior to joining the Astros, Stearns served one year (2011-12) as the Director of Baseball Operations for the Cleveland Indians and three years (2008-11) with Major League Baseball’s Central Office, where he most recently held the position of Manager, Labor Relations. In that role, he assisted in the salary arbitration process, handling uniform player contracts, and was a member of MLB's negotiating team for the most recent Collective Bargaining Agreement.
Before joining Major League Baseball, Stearns worked in the Baseball Operations Departments of the New York Mets, Pittsburgh Pirates and the Arizona Fall League. He is a graduate of Harvard University.

A native of New York City, Stearns is engaged to Whitney Ann Lee and will assume his new role with the Brewers on October 5.
Share this article: