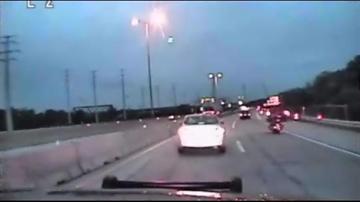 MILWAUKEE- It's the video that proves no call is ever routine.

It was just after 5 Saturday morning and just west of the Zoo Interchange.

The deputy was responding to a call of a crash involving a suspected drunk driver.

With construction nearby it's a tight fit and the deputy alerts dispatch to his exact location.

He was in a marked car with the lights flashing and the sun was up.

Several cars and a motorcycle are seen going around the stopped deputy, but a speeding car came up from behind and made impact.

The deputy first contacted dispatch saying he though the driver of the striking vehicle might be hurt. She was treated at the scene and then charged with her first OWI causing injury. Her blood alcohol was more than twice the legal limit.

It was the deputy who wound up in the hospital, fortunately his injuries are not life threatening.