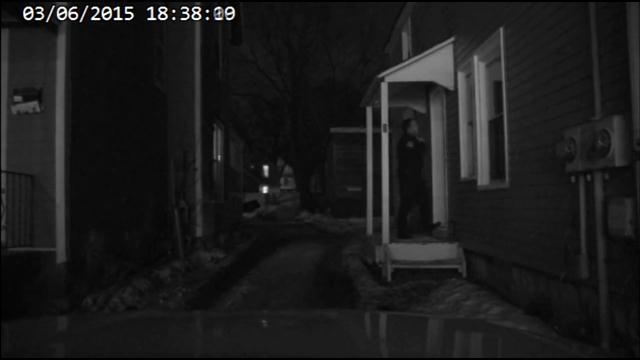 Madison police officer Matt Kenny will not be criminally charged in the shooting death of unarmed 19-year-old Tony Robinson.

And now we're seeing some of the evidence the Dane County district attorney used to make that decision.

This newly released dash cam video shows exactly what happened from the time Officer Kenny pulls up to the apartment to minutes after the shooting, including the crucial 20 seconds that ended Tony Robinson's life. This scene unfolded so fast we've slowed down the video to better tell you the story.

In the video, we see officer Kenny arrive at the home and draw his weapon.  Dane county District Attorney Ismael Ozanne says the officer did so because he noticed a broken in door and heard yelling and thumping inside the apartment that sounded like someone or something being hit.

Less than ten seconds after drawing his weapon Kenny is inside the home and  the officer says Robinson immediately hit him, hard enough that he feared the next blow would knock him unconscious.

At that point Kenny fires his weapon. You can hear three gunshots and  see officer Kenny backing out of the home. We then see Kenny lose his balance, nearly falling to the floor. Then he regains his balance then fires three more rounds and one more shot after exiting the home.

Within seconds two more officers arrive for back up and begin performing CPR on Robinson.

In total, Kenny was in the home for approximately 20 seconds, firing seven shots in just three of those. It was later determined that nobody else was inside that apartment.

Also, documents show Robinson had a mixture of mushrooms, Xanax, and marijuana in his system.

A friend told police Robinson was acting out of control and becoming more violent; something completely out of character for the 19 year old.