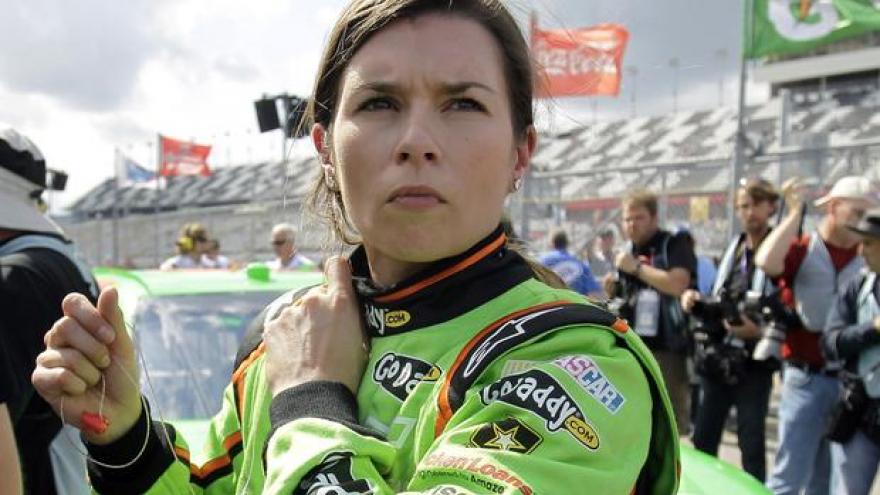 (CBS NEWS) -- Danica Patrick has been living in the fast lane since she was a little girl, making a name for herself racing against the top men in professional motor sports. Her final race will be Sunday at the Indianapolis 500 -- the annual event that launched her groundbreaking career.

"Which makes sense then that the last race would be–" Jacobson started. "Lucky number 13," Patrick said.

Her dream scenario in the race?

"What will be enough though, when you finish that race?" Jacobson asked.

"I think all of my life I've kind of felt like you're only as good as your last race. And it's fine to live by that when you're in the middle of it, because it drives you and pushes you. But for that to really be the reality of your entire career is really silly," Patrick said.

"People are going to remember … 20-some years of racing, the 13 years professionally at IndyCar and NASCAR level … not necessarily how I did at the Indy 500 in my very last year. Unless I win."

In 2005, it was a stunning, almost storybook, debut for Patrick at the Indy 500: a 23-year-old female rookie driver not just hanging with the guys but leading them for a record 19 laps. Her 4th place finish was the highest ever for a woman. The "it" girl in racing had officially burst onto the world stage.

"I didn't call it this, but got coined 'Danica mania.' And there was people everywhere … cover of Sports Illustrated and billboards and TV and … it was an exciting time," Patrick recalled.

"What was it like not just as a rookie, but as a female rookie?" Jacobson asked.

"I don't really know about the female part. I mean, the female part had to do with the amount, because it was a unique scenario being a girl in racing," Patrick said.

"Yeah, I think that was a lot of the publicity about it, or that was the interest from people, certainly," Jacobson pointed out.

"Of course. And it still is the interest, that I'm a girl. It's never going to go away. And nor do I want it to," Patrick said. "Because it's part of what's made me who I am today and given me as many opportunities and luxuries and everything."

But back then, Patrick said it was "overwhelming." Patrick started racing when she was 10 years old breaking records at sugar river raceway in Wisconsin. She was just a teenager when she headed overseas to hone her craft in European road racing, eventually making her much-hyped IndyCar debut 13 years after she first got behind the wheel.

"I love setting a goal and accomplishing it," Patrick said. "I don't race because I like driving fast. Like, people have always asked me that. They're like, 'Do you like to go really fast?' I'm like, 'No, I'm actually not a daredevil.'"

"So why do you race?" Jacobson asked.

"I do it for the journey … it could have been anything," Patrick responded.

But for more than 25 years, it has been racing. Her journey included IndyCar Rookie of the Year honors, the first ever IndyCar win for a female driver, and an eventual jump to NASCAR. Patrick was known for being outspoken and tough, for defying gender stereotypes in sports while proudly flaunting her femininity.

"What was the hardest thing for you along the way?" Jacobson asked.

"I think wanting to be successful every single time I went on track and sometimes not being. Which then, you know, leads to why. And we all have to prove ourselves as people with a job, right? … Your job, my job, anyone's job, you have to prove yourself," Patrick said. "And maybe I had to prove myself a little bit more frequently."

She had to blaze her own trail, if you will – something Patrick said she's been doing since even before she started driving.

"Where does that come from?"

"I don't know! I don't know," she responded. "I've never been afraid of change. And I think that's why my life changes in ways that I would never expect every couple years … which is really scary, but it's also amazing because I'm open to it."

Patrick's latest change is no different. Overcome with emotion last year, she announced it was time to end her racing career. Troubles with sponsorship and signs, as she called them, led to the decision.

"I just felt like there wasn't as much of a journey anymore," Patrick said. "I remember last year, you know, talking to my dad and kind of sayin' to my dad, like, you know, being emotional and being, like, 'I don't really love it.' And he's like, 'I know.' He's like, 'You needed a job. And you were good at it.' And I'm like, 'Yep.'"

It took some time to make her decision.

"But it was more because it was sudden, kind of, like, bursting onto the scene. I came off the scene probably kind of sudden too," Patrick said.

With that the Danica Double was announced, one last NASCAR run at the Daytona 500 this past February, followed by the final race of her career, at the Indy 500, the place where it all began.

No matter the outcome, Patrick will continue to fuel her competitive spirit as an entrepreneur. She launched her own clothing line last year, wrote a book on fitness and owns a vineyard in Napa Valley – all she says are part of her next journey.

"I think when I look forward to these other businesses that I've started very organically, I mean, I'm not going to bore you with how every one of them started. But trust me, they were not planned. They were only dreamt of. I think how much fun it's gonna be," Patrick said.

The trailblazer said she will remember her career as "exciting" and "as being hard."

"I say this with total love and appreciation … I hope that someday I'm known for something else other than racing. And then people remember I was a race car driver," Patrick said. "Not to take away from racing, but only to mean that other things that I did were that successful and meaningful and affected people. That would be a pretty good career."

"Yeah, or three or four or whatever!" Patrick said.