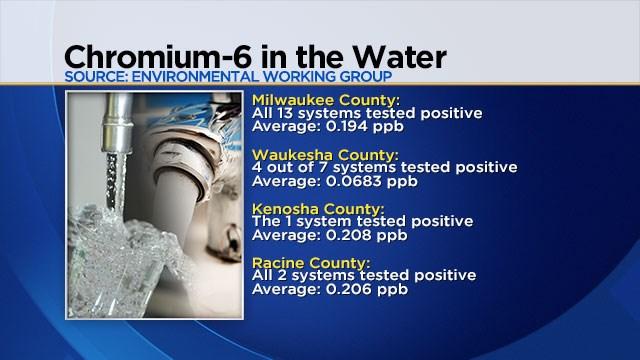 A new report shows there are cancer causing chemicals in the water of millions of Americans.

Including right here in Southeast Wisconsin.

The Environmental Working Group says 75% of Americans have tap water that contains levels of chromium-6 which they consider dangerous.

You might remember the chemical was made famous in the Erin Brockovich case, which later became a movie.

While the US Environmental Protection Agency doesn't have a limit for the chemical, scientists from the California Office of Environmental Health Hazard Assessment, as well as scientists in New Jersey and North Carolina, say it shouldn't be more than .02 parts per billion.

In Wisconsin, Milwaukee's average is .194 parts per billion.

Four out of seven systems detected the chemical in Waukesha County, and both Racine and Kenosha Counties had the highest levels averaging more than .2 parts per billion.

To see more on the study, go to the EWG website here.