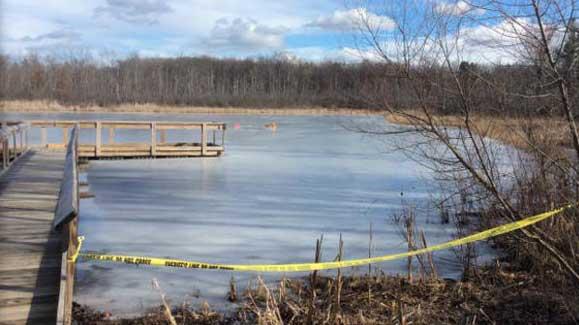 DETROIT (CBS NEWS) - A man and his 4-year-old son died Monday after falling through ice while fishing on a small lake northwest of Detroit.

Witnesses started calling 911 about 10:37 a.m. after seeing the two fall into Alderman Lake in Oakland County. Divers with the sheriff's office located the pair in 8 to 12 feet of water and transferred them to sleds, which carried them across the ice to shore. They were rushed to a hospital, but could not be resuscitated.

Authorities identified them as David Lyons, 30, of Highland Township, and his son, Jackson Lyons.

Calling the deaths a "tragic accident," Highland Township Fire Chief Richard Cole told CBS Detroit the man and the boy were wearing snow suits and neither was wearing a life jacket.

There were conflicting reports about how long the pair had been in the water -- with estimates ranging from three or four minutes to 35.

Cole cautions that no ice should be assumed to be safe -- especially when temperatures have been in the 40s and 50s.

"It's a tragic accident," Cole said.

Authorities across Michigan have warned about the dangers of thin ice over the past few days as temperatures have been unseasonably warm; local temperatures Monday were in the mid-30s to low 40s.

The state Department of Natural Resources said Monday that thawing will occur and ice will weaken when temperatures reach into the 40s. Ice strength can't be determined by its look, thickness, the temperature or whether it's covered with snow, according to the DNR.

Ice also can thaw during the day and refreeze at night, resulting in weak, spongy or honeycombed ice that is unsafe, DNR Sgt. Steve Orange said.

"Ignoring warning signs of weakened ice can result in a life-threatening incident," he said.