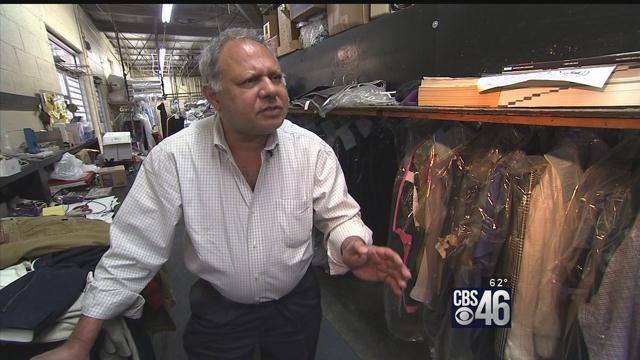 ATLANTA (CBS46) -An exchange between a Metro Atlanta store owner and an African-American customer is going viral and causing outrage.

Andy Foster was compelled to record an exchange between the owner of Ben Hill Custom Cleaners on Fairburn Road and himself.

"When he said 'you people' I stopped in my track cause I didn't believe I heard what I really heard," said Foster.

So Foster quickly grabbed his cellphone to record it, because he wanted to expose what he felt was racism.

"You shouldn't be prejudice in a black neighborhood," Foster said on the video to Amin Chaudry.

"You mother****ers are more racist than anybody," said Chaudry on the recording.

"Those clothes in that establishment belong to African-Americans in this community that patronize him. He has to respect them or he must go," said angry resident Inga Willis.

Chaudry admits he was wrong for saying what he said, but he said there's more to it then what you see on the video.

"You should know that there is something which inspired all this," said Chaudry. "He [Foster] says, 'you g** damn foreigners, you terrorists, you come in our community, you make money.' I said, 'sir, there's no need for it.'"

"That's funny to me. If anybody knows me, they know those words would never come out of my mouth," said Foster.

When pressed about his behavior, Chaudry apologized.

But that's not enough to satisfy angry residents in the community.

"Happy Black History Month. We will be here everyday until something is done," said Willis.