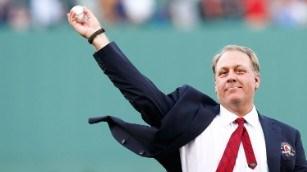 Curt Schilling, a star pitcher who was in the Major Leagues for 20 years and a baseball analyst for ESPN, was suspended from his Little League World Series duty after sending a controversial tweet Tuesday.

The text was superimposed of a red-tinted photo of Adolf Hitler.

Schilling added, \"The math is staggering when you get to true #'s.\"

Schilling also shared the photo on Facebook, where the original post links to a video about the end times.

At first Schilling didn't back off from his post, but eventually he said it was wrong to post the meme.

\"I understand and accept my suspension. 100% my fault. Bad choices have bad consequences and this was a bad decision in every way on my part,\" he wrote.

Schilling deleted the tweet after individually replying to his some of his critics and supporters.

The former pitcher was hired by ESPN in 2010 and is a game analyst and also works on some editions of ESPN's studio show \"Baseball Tonight.\"