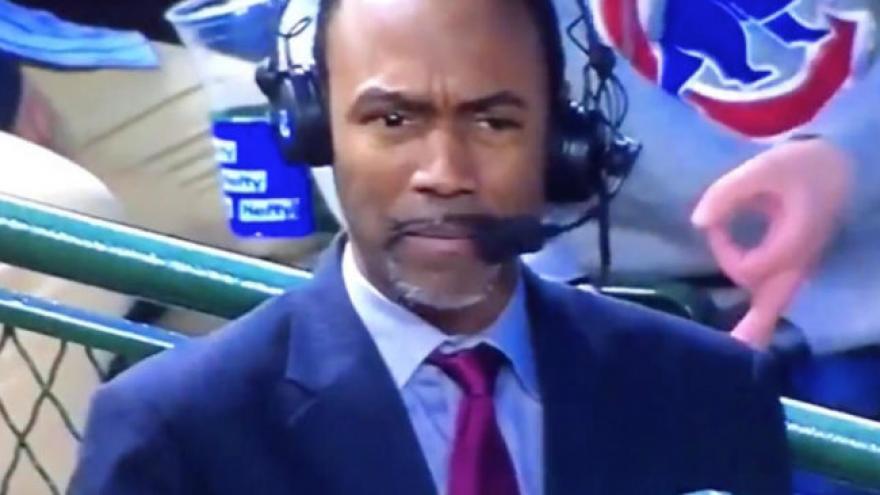 The Cubs have identified and banned a fan who flashed a "white power" hand gesture during the broadcast of Tuesday night's game against the Marlins. Team president Theo Epstein made the announcement on Wednesday.

At a news conference, Epstein said the team was able determine the fan's name and said he can never set foot inside Wrigley Field again.

NBC Sports Chicago reporter Doug Glanville, who is black, was on the air during the third inning of the Cubs' game against the Marlins when a fan made the hand gesture, a silent symbol for "white power." Many on Twitter noticed and expressed their shock.

The origins of the gesture, which resembles an OK sign, can be traced back to trolls on the internet message board 4Chan, who invented it as a hoax, according to the Anti-Defamation League, which tracks the activities of hate groups. It has since evolved into a symbol used by members of the alt-right and white supremacists.

Hours after the incident was caught on camera, Cubs president of business operations Crane Kenney said in a statement to CBS Chicago that the team was investigating the incident.

"An individual seated behind Mr. Glanville used what appears to be an offensive hand gesture that is associated with racism," Kenney said. "Such ignorant and repulsive behavior is not tolerated at Wrigley Field.

The Cubs said if fans see any derogatory behavior at Wrigley Field, they should report it to ballpark staff. The team said any fan who does something like this during a game will be removed and permanently banned.