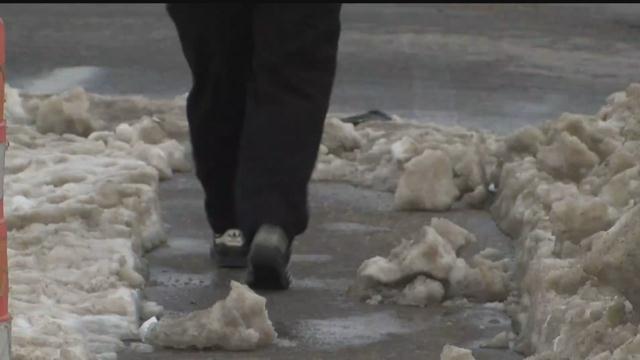 More snow in the forecast four Southeastern Wisconsin and it could mean trouble for some spots still buried from last week.

It's a big issue for pedestrians around South 27th street and College Avenue where in the middle of crosswalks there are these bulky snowmounds completely blocking paths.

If you're in a wheelchair you're basically forced into traffic if you wanted to cross the street.

Nian Omar pushed a stroller down the road on Tuesday. She admits she's putting herself at risk but she says she's out of options.

"Actually it's very hard because I don't have a car and I have to walk around. And they don't clean the walk," Omar said.

As far as Milwaukee District 13 Alderman Terry Witkowki's knows - the crosswalks are supposed to be clear.

But to be fair, the intersection is the meeting of four cities including Oak Creek, Franklin, and Greendale. So who's responsible?

To get more complicated, Milwaukee County also has some agreements to clear state roads like south 27th street - aka Highway 241. But the cities share some of those responsibilities.

And if construction is the excuse for the closing, no traffic alerts have been issued and no pedestrian detours have been assigned.

The only new signage are these limp bus stops posters hanging off crossing signals.

If you wanted to cross the street - avoiding this spot - there really are no good options unless you're willing to cross where there's not a crosswalk.

It's about a half-mile or more walk in either direction to find another spot that may or may not also be covered in snow.