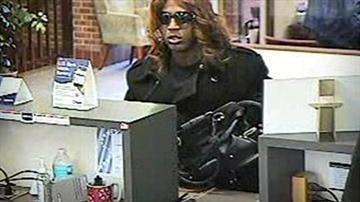 KENOSHA - Police have released surveillance pictures of a suspect involved in a bank robbery Tuesday morning. They say they believe the suspect was a man dressed as a woman when he walked into the US Bank branch on 22nd Avenue. He told the teller it was a robbery and demanded cash. The man was wearing a red wig, pink boots and a long dark colored coat. They say the suspect is a black man about 6 feet tall with a medium build. He was last seen leaving the bank with an undisclosed amount of cash and heading southwest on foot away from the bank. If you have any information you're urged to contact Kenosha Police at (262)605-5294 or Kenosha Area Crime Stoppers at (262)656-7333.