Crews stumble on likely arson case due to no 911 call 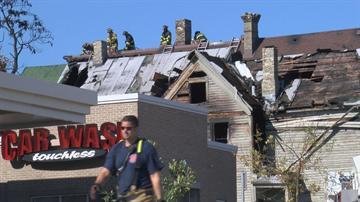 MILWAUKEE -- A large and suspicious fire destroyed three houses just north of Marquette University Sunday afternoon.  But as investigators pieced together what happened, firefighters wonder if they could've done more.  Crews stumbled across the fire because no one called 9-1-1.

\"When we got here, the fire was so well involved and so well developed, we make the assumption it had been burning for quite some time,\" Assistant Chief Dan Lipski said.

Around 12:20 p.m., Milwaukee firefighters were headed to a different fire when they came across several vacant buildings burning near 12th and Highland.  Additional crews responded to the homes and made a point of checking twice for anyone inside.

\"Checked every nook, every cranny and every corner to make sure there wasn't somebody squatting in there, a kid or what have you,\" Lipski said.

Firefighters didn't find anyone, but were suspicious of arson right away.  The front home had fire on three floors and a smaller building 25 feet away had fire in the basement.

\"It would've been darn near an impossibility for that fire to have communicated to that rear building without some sort of human interaction,\" Lipski said.

Crews got the first two buildings under control within a half hour, but fire spread to a third building's attic.

Neighbors told CBS-58 no one had lived in the buildings for some time, but one man still sees people come and go.

But no one suspicious to Richardson.  He only saw the smoke and fire - a scene crews wish they knew about sooner.