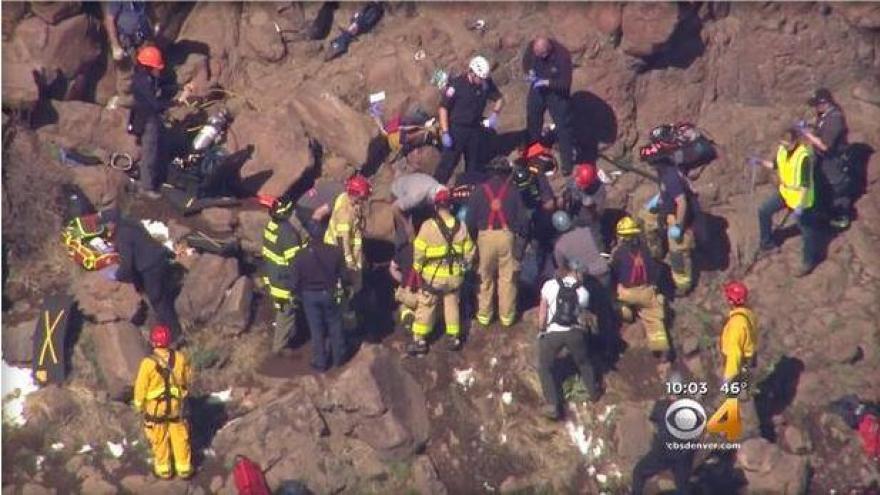 (CBS) GOLDEN, Colo. -- A woman hiking on Colorado’s North Table Mountain, on the edge of the Rockies, was trapped and severely injured by a 1,500-pound boulder Wednesday afternoon, reports CBS Denver.

The huge rock apparently split away from the mountain and fell on her, according to Golden fire and police spokesperson Karlyn Tilley. The 30-year-old victim, who has yet to be identified, has multiple fractures and listed in critical condition but is said to be stable.

The woman, who was visiting from Europe, was in town for a conference and arranged to go rock climbing with a local man.

“He heard a large cracking sound, he looked up, and about 30 feet above them saw this boulder,” Tilley said. “They couldn’t get out of the way fast enough, it just happened so quickly.”

A passerby saw the accident and rushed down the mountain for help.

“As he was running down, there were two paramedics with Littleton Fire that just happened to be hiking in the area,” Tilley told CBS Denver. “They were not far away from her, and were able to start administering aid to her almost immediately.”

Once rescue crews got to the scene, the hard part had only just begun.

“We had to hike in a hydraulic lifting system with air bags so that we could lift the boulder off of her just enough to safely get her out,” said Tilley.

Crews then carried the woman for another 45 minutes to the top of the mountain, where she was airlifted to the hospital.

Golden fire says recent weather changes could have played a role in the accident.

“When the soil is really soft like this it’s possible rocks will get a little bit looser than normal, but really something like this could happen any time, anywhere,” Tilley said.

No restrictions have been put on the trail since the accident.