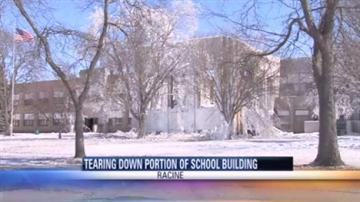 RACINE - Nearly two weeks after a massive fire destroyed the gym and caused widespread damage to Mitchell Grade School, crews are tearing down what's left of the gym.

The sound of the building crashing to the ground could be heard throughout the school's neighborhood Wednesday morning.

Some onlookers braved the bitter cold to witness the moment and capture it with pictures.

The demolition crew had to spray water during the process to keep the wind from spreading dust.

When complete, the debris will be sorted, put in dumpsters and taken off the property.

The company in charge, Paul Davis National, plans to have that done before middle school students come back on Tuesday, March 18.

\"We try to make it as easy and uneventful as possible for them because they're not used to this,\" said J. Murphy, the company's director of operations. \"They don't go through this everyday and it's traumatic for them.\"

The Racine Fire Department is collecting school supplies for students at its six fire stations.

Now that the gym walls are torn down, the lead investigator tells CBS 58 they can begin work to determine what caused the fire.