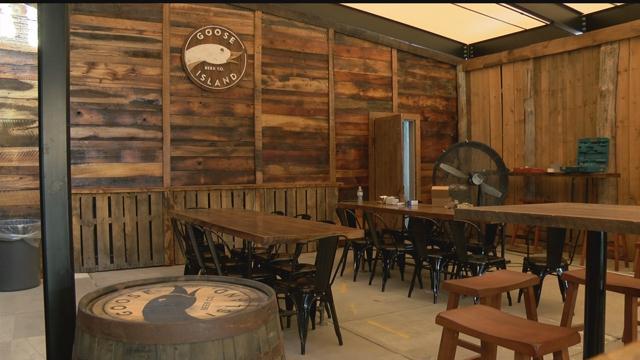 A new bar looks to steal the show at the Wisconsin State Fair all because of how it's made.

\"I've had several projects in the past that have challenged and this was on the top of the list,\" said general contractor David Termaat.

The Goose Island Ale House is a new addition to the fairgrounds and the inside, is made out of wood from 100-year-old barns.

The bar, tables and siding have been carefully crafted to create the unique structure.

The barn's owners were going to destroy them, until an idea to preserve the wood was brought to the attention of Leanne Hock and her husband. They own the Budweiser Pavilion next door and wanted to do something new with its old patio space.

Three months later, a barn is given new life, but the storied history remains.

\"One of the contractors noticed there was a bullet hole in one of the pieces of wood,\" said Hock. \"So what happened there? Was somebody shooting a wolf?  In the 100 years that the barn stood, there's a lot of history a lot of things happened and we're hoping to make some history here.\"

The Goose Island Ale House will serve craft beers. With them, fair-goers can enjoy the newly created beer battered, pretzel crusted, pork tenderloin on a stick.

You can get in for $2 by donating at least two non-perishable food items at the entrance gates. But, you have to get there before 4 p.m. to get the deal.