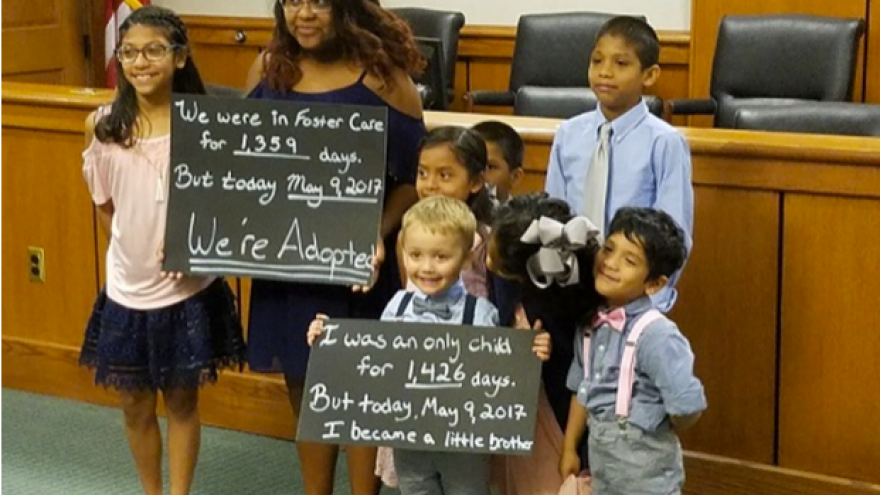 For more than three and a half years, a group of seven siblings — ages 5 to 14 — have waited in foster care, hoping to one day find a couple they could call mom and dad.

"We prayed about it for one night, woke up the next morning after not sleeping very well and we were like, 'Yeah, those are our kids,'" Jessaka Clark, 25, told CBS News.

Growing up, Clark had a "front row seat" to the foster care system. Her parents fostered children for years, sometimes 10 to 12 at a time. Eventually, they adopted two boys — her brothers.

"We both knew that we wanted to adopt before we met each other," Clark said.

The couple was told they would never be able to have children. Three years ago, they were surprised with the birth of their son, Noah.

But their minds were made up. They still wanted to adopt.

So they started working with a case worker in January 2015. Over the course of the year, the couple matched with several children, but the adoptions always fell through.

Until finally, one day in March 2016, they were approached about a group of kids who call themselves the "Super 7.”

Clark's husband was the first to get the phone call about the brothers and sisters and immediately floated the idea to his wife. After talking it over, they agreed to open up their home to the kids.

"They started calling us 'mom' and 'dad' the first time they met us," Clark said. "I knew they were my kids. I immediately knew I wanted to be their mom. You both kind of have to fall in love with each other."

Clark was amazed at how easily the kids took to their family, especially given their history with parental figures. The couple doesn't know many details about the children's past, but they do know it was a story of neglect.

"They don't trust moms," Clark explained. "From their experience, moms leave and moms don't give you food. You have to basically break that image down and recreate it for them."

And the adjustment process for the parents?

"Going from 1 to 8 [children] wasn't really difficult," Clark said. "It was more normal for us than it probably should have been."

After months of visitations and monitoring, the Clarks can now officially call the "Super 7" their own, signing the legal adoption papers Tuesday afternoon. A day later, a GoFundMe page was created to help the family raise money towards a larger house. Within 24 hours, more than $32,000 was donated and their page was flooded with words of support.

"It's definitely an incredible feeling," Clark said. "It's not something I take lightly."

It isn't always easy, Clark admits, and there's an occasional "You're not my mom" argument, but she's dedicated to making it work.

"You have to work at earn their trust," Clark said. "The kids are fielding that image in their mind of what a mom looks like and it gets better each day. Hopefully, this will help them to be good parents have good bonds in their relationships when they're older as well."