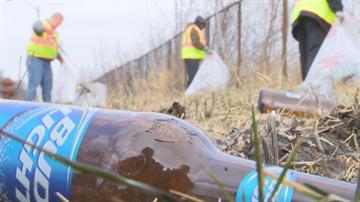 MILWAUKEE -- Poke by poke and with each sweep of a rake, Danyel butler watched Milwaukee County workers clean up the trash across the street from her home along I-43 Friday.

\"I was grateful,\" Butler said.  \"I thought that was really nice.  I like seeing our neighborhood cleaned up.\"

Department of Transportation workers spent the last week picking up what melting snow revealed along the  freeways -- from empty beer bottles to wrappers and even syringes.

\"Easy access on the express way, so they stop and they throw things out their windows or clean their cars out,\" Butler said.

County DOT Director Brian Dranzik says his teams will fill trucks with garbage many times.  It's a process  that starts in the early spring, but goes on throughout the year.

\"Just make it look better,\" Dranzik said.  \"Take it from, where you see a lot of trash out here and take it from something that  looks like a mess to something that's cleaned up and looking a lot better.\"

But the crews can only do up so much.  Even after their passes Friday some garbage remains.  That's why Butler and  her seven-year-old son plan to help out.

\"He's been asking me for about a week now, can he get out here and help clean up the neighborhood and things like  that,\" Butler said.  \"I told him we could and so we're going to get out here a little later.\"

Crews will soon they'll be working on the embankments closer to interstate traffic.  The county wants drivers to be especially mindful of workers when they're that close.