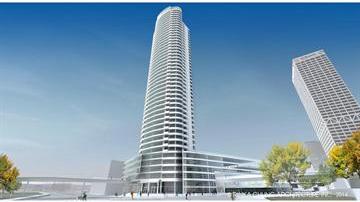 The project focuses on the Downtown Transit Center, which is across from Discovery World.

\"I appreciate Judge Foley's clear decision allowing the redevelopment of the underused Downtown Transit Center to move forward. The planned Couture development will create a vibrant public space that improves access to the lakefront, creates thousands of jobs and adds another signature building to Milwaukee. If Preserve Our Parks wants to continue to appeal this ruling, I hope they will do in an expedited manner.\"

The City of Milwaukee and Milwaukee County  filed a lawsuit in February against Preserve Our Parks, seeking approval from a judge to sell the Downtown Transit Center and move forward with a multi-million dollar redevelopment project.

The lawsuit was filed on February 20 in Milwaukee County Circuit Court. The dispute is over the $122 million development of a 44-story mixed-use skyscraper that would feature apartments, retail space, public space and public transportation concourse near Milwaukee's lakefront.

In court documents, the city and county alleged that the plans for the project have been hampered by ongoing threats from non-profit group Preserve Our Parks to sue the county over the land. Preserve Our Parks has argued that the redevelopment would be a violation of the Public Trust Doctrine and state constitution. The group has been vocal about plans to sue Milwaukee County to stop the sale and redevelopment of the property.

The city and county say those threats have created uncertainty for all parties involved in the project.

\"Because of POP's threatened lawsuit, no title insurance company is currently willing to issue title insurance on the property, thus making it impossible for any redevelopment to occur, until the issue presented by this case is resolved,\" court documents read.

The plaintiffs were asking for a declaratory judgement that confirms the property in question is not covered by the Public Trust Doctrine. That judgment would remove uncertainty about the land, clearing the way for the project to move forward.