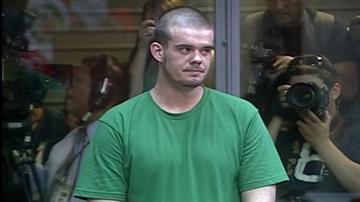 (CNN) -- Joran van der Sloot has been tied to the disappearance of one woman and been convicted of murdering another.

The Dutch national, who is serving a 28-year sentence for the killing of Stephany Flores -- married a Peruvian woman named Leidy Figueroa on Friday morning, his attorney told CNN en Espanol.

The nuptials took place at the Lima, Peru, prison where the 26-year-old van der Sloot is being held, according to the lawyer, Maximo Altez. John Barrera, Mayor of Ancón District, presided over the ceremony.

Van der Sloot is expected to become a father in September, when Figureoa is due to give birth to their child together, Altez said.

But just like he won't have a honeymoon anytime soon, van der Sloot won't be around to change diapers after the baby heads home.

That's because he has been sentenced to 28 years for the murder of Flores.

Once he's eligible to get out of prison for that crime, van der Sloot is set to be extradited to the United States to face charges related to the case of Natalee Holloway, the Alabama 18-year-old last seen leaving an Aruba nightclub in 2005 with van der Sloot and two other men.

There's no reason to believe that Figueroa didn't know about van der Sloot's past when the two first encountered one another.

They met when Figueroa, an accountant with a young boy from another relationship, was visiting a relative in the Peruvian prison where van der Sloot was being held.

\"They became friends and spent a lot of time together in his cell,\" Altez said earlier this year. \"Unlike the United States, here in Peru, loved ones or relatives can see inmates inside their jails.\"

In January 2012, van der Sloot made a far different pronouncement when he pleaded guilty to all charges against him in Flores' killing.

\"I am really sorry for what happened,\" he told the three magistrates overseeing his trial in Lima.

Police say van der Sloot killed the then 21-year-old Flores in his Lima hotel room in May 2010, then took money and bank cards from her wallet and fled to Chile. He was arrested a few days later in that South American country.

Investigators believe van der Sloot killed Flores after she found something related to the Holloway case on van der Sloot's computer as she visited with him in his hotel room.

Lawyer: 'No hidden agendas' with marriage

Holloway's body has never been found, and her case -- which drew intense international attention in the weeks after it unfolded -- has never been solved.

Van der Sloot himself was arrested twice in Aruba in connection with the Alabama teenager's disappearance. However, he was never charged in that Caribbean nation.

He has been charged in the United States in relation to her case, though.

In June 2010, a federal grand jury based in Alabama indicted van der Sloot on charges of allegedly attempting to extort $250,000 from Holloway's mother, Beth.

Van der Sloot offered to provide what turned out to be bogus information about the whereabouts of Holloway's remains in exchange for the money, according to the indictment against him.

He was allegedly given $25,000, which authorities say he used to travel to Peru for a poker tournament.

In March, Peru agreed to extradite van der Sloot to the United States on these charges sometime after he's eligible for release, in 2038, for Flores murder.

Peruvian media have raised the possibility that van der Sloot got married to avoid extradition to the United States.

But Altez, his defense lawyer, this spring dismissed that suggestion, saying then that the wedding shouldn't be \"a big deal.\"

\"He's getting married because he's in love and is having a child,\" Altez said in May. \"There are no hidden agendas.\"