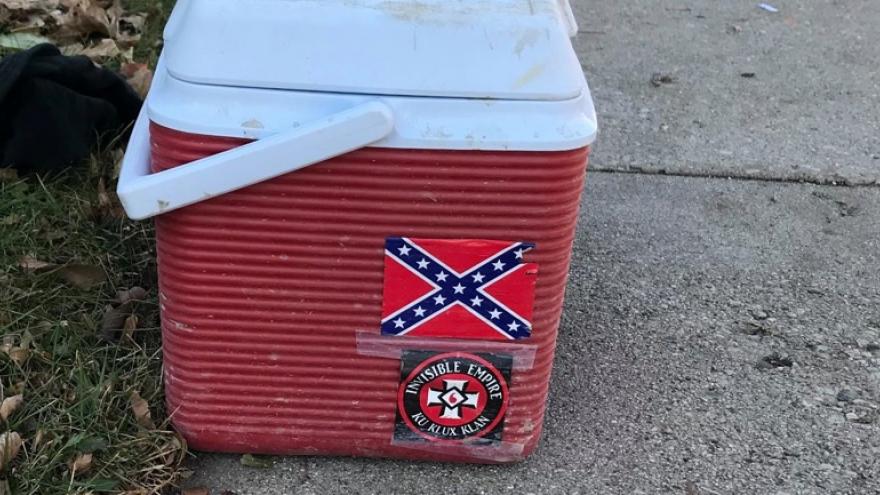 A panel of the Milwaukee Common Council on Thursday also considered permanently barring American Sewer Services from ever bidding on contracts and compelling the company's owner to testify before them. Votes on the resolutions are expected in two weeks.

"Given the amount of facts we have now, a reasonable person would say that racism is clearly tolerated" at the company, said Alderman Nik Kovac, a member of the city's Public Works Committee.

The resolutions are a response to two photographs from early December. In one, a picture of a company employee's cooler shows a KKK sticker. The photo was taken by and posted on Facebook by immigration activist Sam Singleton-Freeman. In another posted on Facebook, two workers have holstered guns and a third has a firearm in his hand. The three workers are white and the photo taken in a predominantly black neighborhood reads, "this is how you finish concrete in Milwaukee."

"The idea that you would feel it necessary to be armed and to brandish a weapon in a majority black neighborhood while you're still on the job is deeply entrenched in racial fear," Kovac said, adding: "Let's just call it racism."

American Sewer Services has said it fired the workers responsible. But the company's owner, Dennis Biondich, has angered some aldermen because he failed to attend a meeting with them set on Dec. 18 to accommodate his schedule. An employee he sent in his place said he was dealing with unspecified medical issues. The Associated Press could not reach the company for comment because its voicemaill was full and not taking messages.

"He still has not had the decency, the respect, or the responsibility to come before this council and face this situation like a responsible business owner, like a man," said Alderman Russell Stamper, who is sponsoring the three resolutions.

The company has worked for the city for more than 30 years and has 11 pending contracts worth more than $50 million. One of the proposals aldermen are considering would terminate two contracts worth about $900,000. Other contracts are more than halfway finished and ending them would hurt the city more than the company, said Ghassan Korban, the public works commissioner. He said Biondich is willing to not contest the termination of the two contracts.

"He's recognizing the enormity of this issue," Korban said.

A couple of aldermen said the employees' actions were reprehensible but thought it unfair to punish the entire company by terminating their contracts.

"We're all concerned, but we're losing our sense of proportion here," Alderman Robert Donovan said. His comments led to a tense exchange with Kovac, who said Donovan's remarks were "symptomatic of the general sense of ignoring when possible and then immediately forgiving racism."