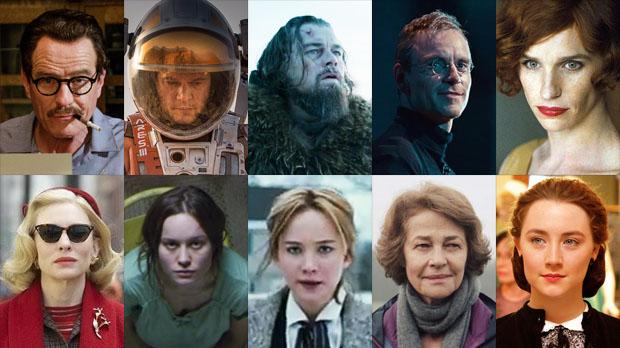 "The Revenant," about a frontiersman's bitter struggle to survive in the wilderness, leads this year's Academy Award race with 12 nominations, including Best Picture. The film also earned Oscar nominations for star Leonardo diCaprio as Best Actor, Tom Hardy as Best Supporting Actor, and Alejandro G. Inarritu as Best Director.

Other films nominated for Best Picture were "The Big Short," a comic take on the 2008 Wall Street crisis; "Bridge of Spies," the true-life story of the Cold War trade for captured U.S. pilot Francis Gary Powers; "Brooklyn," a period romance of about Irish immigrant who finds love in the New World; and "Mad Max: Fury Road," a journey through the post-apocalyptic wastelands.

Also: "The Martian," about the race to rescue an astronaut stranded on Mars; "Room," about a young woman and her child held captive in a backyard shed by a sexual predator; and "Spotlight," about a Boston newspaper's probe into the Catholic Church's coverup of priests who preyed on children.

In addition to DiCaprio (who'd previously received four acting nominations), the Best Actor nominees were Bryan Cranston as Hollywood screenwriter Dalton Trumbo, blacklisted during the '50s Red Scare, in "Trumbo"; Matt Damon as an astronaut stranded on the Red Planet in "The Martian"; Michael Fassbender as the founder of Apple in "Steve Jobs"; and Eddie Redmayne (last year's winner for "The Theory of Everything") as an artist who undergoes gender reassignment surgery in "The Danish Girl."

Damon, who won a Best Original Screenplay Oscar for "Good Will Hunting," has received two acting nominations, while Fassbender was nominated for Best Supporting Actor for "12 Years a Slave." It's the first nomination for Cranston.

The nominees for Best Actress are Cate Blanchett as a married woman who begins a lesbian affair in "Carol"; Brie Larson as a kidnap victim raising her child in captivity in "Room"; Jennifer Lawrence as an entrepreneur in "Joy"; Charlotte Rampling as an elderly woman shaken by revelations from her husband's past in "45 Years"; and Saoirse Ronan as an immigrant who finds romance on both sides of the Atlantic in "Brooklyn."

Blanchett has won two Academy Awards (for "The Aviator" and "Blue Jasmine"), and been nominated four other times. Lawrence won Best Actress for "Silver Linings Playbook," and has two other nominations, while Ronan received a nomination for "Atonement."

It's a first nomination for Larson and Rampling.

Sylvester Stallone, who was first nominated for playing Rock Balboa in the original 1976 "Rocky," is nominated for his character again as Best Supporting Actor, training a new generation of fighter, in "Creed." Joining him are Christian Bale, as an investor who predicts the collapse of the housing market, in "The Big Short"; Tom Hardy as a trapper who leaves a fellow frontiersman to die in the wilderness in "The Revenant"; Mark Ruffalo as an investigative reporter in "Spotlight"; and Mark Rylance as a Soviet agent in "Bridge of Spies.

Jennifer Jason Leigh as a killer being transported to the hangman in "The Hateful Eight, received her first Oscar nomination for Best Supporting Actress for Quentin Tarantino's "The Hateful Eight," as did Alicia Vikander, as the wife of an artist who undergoes gender reassignment surgery, in "The Danish Girl, and Rachel McAdams as an investigative reporter in "Spotlight." Also nominated: Rooney Mara as a young girl who has an affair with an older, married woman in "Carol"; and Kate Winslet as a marketing executive in "Steve Jobs."

Pixar's "Inside Out" and Charlie Kaufman's "Anomalisa" lead the Best Animated Feature category, along with the Aardman stop-motion "Shaun the Sheep Movie"; from Brazil, "Boy and the World"; and the Japanese anime "When Marnie Was There."

Emmanuel Lubezki, who won the Best Cinematography Oscar the past two years for "Gravity" and "Birdman," may become the first DP to win three years in a row, with his nomination for "The Revenant." Roger Deakins' 13th nomination in this category, for "Sicario," may be his lucky one. Also nominated: "Carol," "The Hateful Eight" and "Mad Max: Fury Road."

Lady Gaga's "Til It Happens To You," from "The Hunting Ground," and Sam Smith's "Writing's on the Wall," from "Spectre," are among the Best Song nominees, along with "Earned It" (from "Fifty Shades of Grey"); "Manta Ray" (from "Racing Extinction"); and "Simple Song #3" (from "Youth").

Of note: Composer Ennio Morricone, a legend of spaghetti westerns who received a lifetime Oscar in 2007, was nominated for his return to the genre for the score of "The Hateful Eight," while John Williams' nomination for Best Original Score for "Star Wars: The Force Awakens," is his 50th Academy Award nomination, breaking his own record for most Oscar nominations among living recipients.

"Amy," the tragic story of singer Amy Winehouse, and "What Happened, Miss Simone?" about singer-activist Nina Simone, were both nominated for Best Documentary, along with "Cartel Land," about the drug wars along the U.S.-Mexico border; "The Look of Silence," about the fallout of the Indonesian anti-Communist genocide; and "Winter on Fire: Ukraine's Fight for Freedom."

Winners of this year's Oscars will be announced on Sunday, February 28, at the Dolby Theatre at Hollywood & Highland Center in Hollywood. The show will be hosted by comedian Chris Rock.