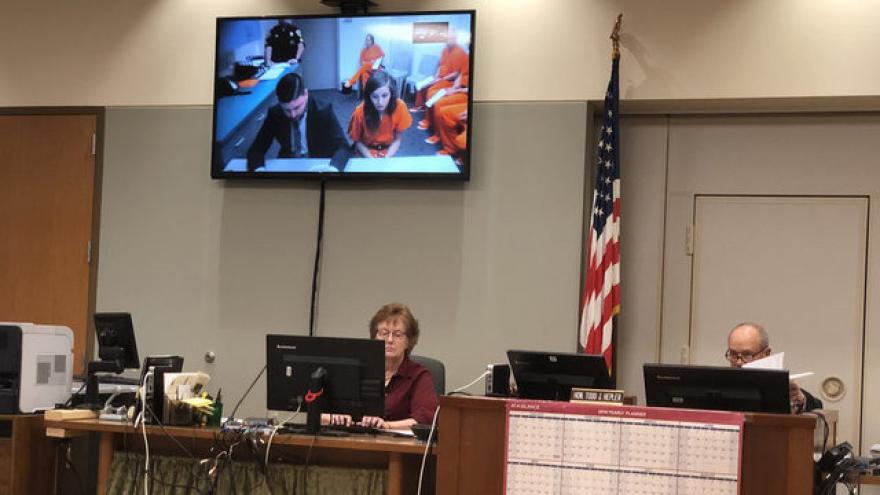 PORTAGE, Wis. (WISC) -- Two 21-year-olds are scheduled to appear in Columbia County Circuit Court Wednesday afternoon after police said they knocked one police officer unconscious and injured another this weekend.

The Portage Police Department was called to the Ridge Motor Inn around 10:30 p.m. Sunday after reports came in saying a man had been driving recklessly in the snow in the motel's parking lot and confronting motel guests. Motel guests said they did not feel safe, according to court documents.

Court documents said the motel clerk, Olivia Boomsma, of Rio, told officers the man in the truck was her ex-boyfriend. Police later discovered that was not the truth and that Boomsma had provided a false name for the driver of the truck, according to the criminal complaint.

Several hours later, an officer saw a truck parked at a Kwik Trip gas station that matched the description of the one from the incident at the motel. They discovered the truck's driver was 21-year-old Jacob Hellenbrand-Bell. Boomsma was also at the gas station, and an officer told her to wait in the truck.

Court documents show as the officer tried to handcuff Hellenbrand-Bell, Boomsma suddenly moved in and punched the officer in his left eye. She continued to hit the officer as he tried to push her away and repeatedly told her to stop. She replied with, "What are you going to do? F---ing shoot me?" according to the documents.

Body camera footage shows another officer, Sgt. Eric Walters, arriving at the gas station just after midnight to help Lowenhagen. In the footage, Walters grabs Boomsma, and they both fall to the ground.

While Boomsma and the sergeant were on the ground, Hellenbrand-Bell kicked the sergeant directly in the side of his face, knocking him unconscious for more than two minutes, police said.

The criminal complaint said Boomsma got up from the ground and attacked the other police officer, Lowenhagen.

An off-duty medical assistant from Divine Savior Hospital who saw the situation unfold put herself between Walters, who was still unconscious on the ground, and Boomsma and Hellenbrand-Bell.

Once the two were put in squad cars, they continued to kick and struggle, the criminal complaint said.

Hellenbrand-Bell is charged with battery to a law enforcement officer, resisting an officer felony bail jumping and disorderly conduct.

He was put on probation and sentenced to one year in jail on April 6 for hitting a motorcyclist at almost 100 mph in April of 2017. He was also charged with two counts of bail jumping, repeat offenses of possessing marijuana, and a repeat offense of causing injury while operating a vehicle under the influence.