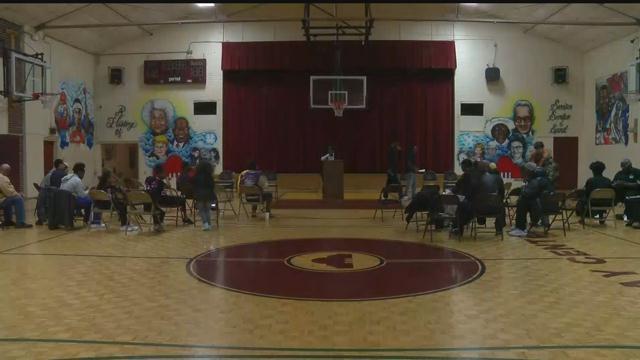 It has been almost one month to the day since gunfire erupted inside the George Bray Neighborhood Center in Racine.

Three people were shot the night of March 11th during a party at the center.

Saturday, community members took the first step in taking back the area.

The local father that put together an anti-violence summit says he chose the Bray Center because of the March shooting.

Jamal Cronin said the same place the tragedy happened is the best place to come together.

"There's ways to stop so-called beef, or so-called disagreements, or 'I don't get along with this person' before it gets to the level where you've got to get a gun," said Cronin.

Cronin asked people in the community that have seen violence first-hand to speak. After the speakers, the podium was open for anyone to comment about recent violence. Cronin says the goal is to get the community to come together.

"This town is too small for the violence going on right now," said Cronin.

A number of former gang members and a retired principal spoke.

"You let the thugs steal them away from me -- because instead of trying to be smart and use that head to be a scholar and strive, they're using that head as a hat rack," said Belinda Cronin. Cronin is a retired school principal. She talked about seeing smart students turn to the streets.

"From 1991 to 1995 I drove around Racine with your same urge to violence, carried the same guns you all carry..." said the cousin of Dante Cottingham.

He read the message on Cottingham's behalf. Cottingham is currently serving a life sentence for killing a man. He is a former Racine gang member, and has been in prison for 21 years.

"We've lost too far much. It's time to deal with our disagreements like men with communication not violence," wrote Cottingham.