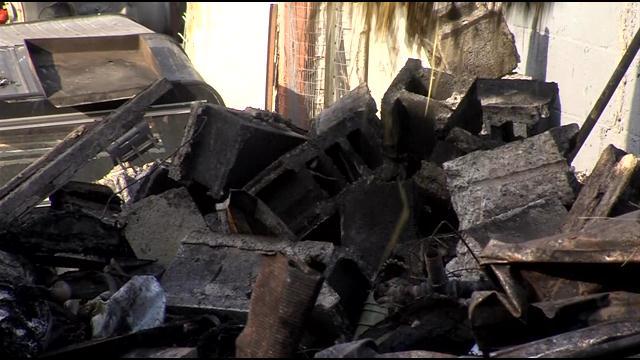 WEST BEND-- For Rick Takacs of Meadowbrook Market, checking on his three best friends, Myron, Bugsby, and Puff, all emus-- is the best part of his day.

\"Myron is coming out of it starting to hug again,\" said Takacs.

Some animals are in better spirits, but others, like Myron, are still recovering after a devastating barn fire.

\"If they would've perished, and I would've stood there and just let it happen, I would have a lot rougher time,\" said Takacs.

Clean up efforts are still going after the fire last week, at least 90 animals died.

\"Even the ones that weren't in the barn are traumatized,\" said Takacs.

While the animals rest-- the humans are hard at work.

\"Clean up effort is going really fast, much faster than I can ever dream of,\" said Takacs.

That's because the community is stepping up.

\"Rick is a really good guy, the community really loves him, he does a lot for everybody, so we're trying to give back,\" said Donnie Welch, a Meadowbrook Farm Volunteer.

\"What's going to be the hardest part is how we can go about and get that haunted cornfield up and going,\" said  Takacs.

Takacs says most of the decorations for the cornfield were destroyed, and he needs help making cutouts of haunted creatures.

\"These cutouts everyone that's made, we can put it in the pumpkin field on the wagon ride in the cornfield or in the yard,\" said Takacs.

Takacs says this will help him focus on clean-up and planting season.  It will be some time before he re-builds the barn, but Takacs says he optimistic about the future.

Anyone that can help is encouraged to drop off their donation at the farm.