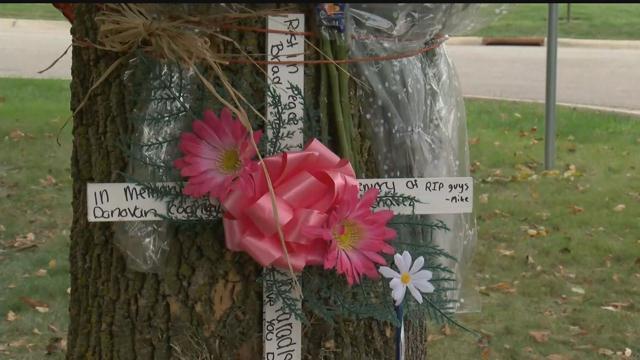 As cars come and go, evidence that forever changed five family's lives is hard to miss.

"After I saw what was wound around the tree down there," said neighbor Phyllis Wolfgram.  "I just can't imagine what's going through the parents that are going to get the news."

Early Wednesday morning, in the town of Ixonia, Jefferson County Sheriff Jeffrey Parker said a deputy was involved in a traffic stop.

But for reasons unknown, the driver took off and the speeding car headed into Watertown. A slight curve at the corner of Concord and Richards avenues was too much to handle and the car crashed into a tree.

"I was so afraid it was someone that I knew, but I didn't recognize the car," Wolfgram said.

Donovan Cagney, 17, and Bradley Chavez, 17, died. Three young girls in the back seat were taken to the hospital. All of them had a connection to Watertown High School.

"They were rare kind of people and you're never going to find those type of people again," said Joseph Heisel, a friend of the victims. "And it's just sad we lost good friends of ours."

The community mourned the sudden loss together Wednesday night at Riverside Park.

Meanwhile, at the crash site, balloons and flowers looked to cover those traumatic last moments, a start to healing the scars left behind.

The Jefferson County Sheriff's Office has turned over the investigation to the State Patrol Reconstruction Team and the Department of Criminal Investigation.

Thursday, counselors will be on hand for Watertown High School students, and a special session for the community will be held in the school's library from 5:30-7 p.m.