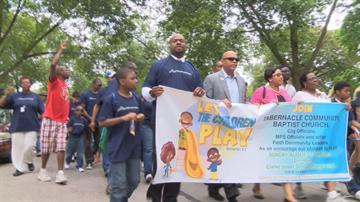 MILWAUKEE -- On the very playground where his 10-year-old daughter, Sierra Guyton, was gunned down nearly three months earlier, Onjuan Guyton had to smile.

\"The sun is out, the sky is blue and that lets me know my baby is in a better place,\" Guyton said.

Most families kept their children away from the Clarke Street School playground after Guyton was shot in the head May 21st.  But Sunday, community members returned in force.

A march to the playground started three blocks away, outside the Tabernacle Community Baptist Church.  Pastor Don Darius Butler helped lead the rally.

\"We will not be gripped by fear,\" Butler said.

He says people in this neighborhood are tired of hiding in their  homes when their children should be out enjoying life.

Church leaders and public officials asked the crowd to loudly declare their presence at the school.  Most parents said they've been waiting a long time for this day to come.

Milwaukee Police officers showed their support too, promising to do all they can to protect the neighborhood.  But the crowd at the school knows fighting crime will take unity.

\"We can't sleep on this situation,\" Guyton said.  \"If we want something to get done we need to keep on at it.\"