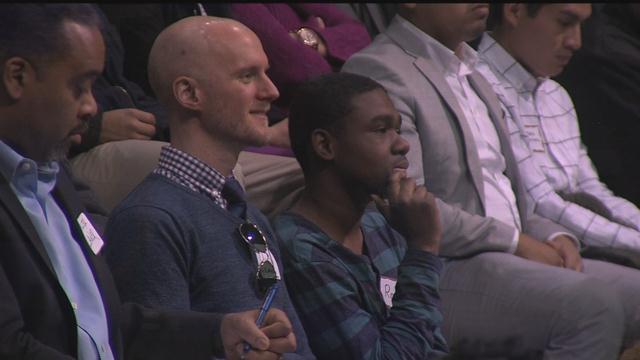 It's a different world where Dusty Weis and Romeo Thompson come from.

"I'm a small town kid from the sticks of Wisconsin and they matched me up with this big city kid from the north side of Milwaukee," said Weis.

But as it turns out, the two are compatible.

"We hung out for about five minutes and I looked at him and said, 'oh yeah, this is my little brother,'" he said.

They've had a mentor-mentee relationship for about two and a half years. And over that time, Thompson has seen and learned a lot.

"Like how to cook, how to buy groceries, pay for stuff I need," said Thompson.

It's that bond Milwaukee city and county leaders want for all young people.

"The need is there," said Amy Chionchio, CEO of Big Brothers Big Sisters of Metro Milwaukee. "We have 500 kids on our waiting list today."

"We're in a state, one of very few, that does not have a statewide mentoring network," said MPS Superintendent Dr. Darienne Driver.

So the community is creating one, with the help of organizations like the Bucks. Former player Marques Johnson said a mentor was key to his success.

"Wesley Snipes mentored me in the movie White Men Can't Jump," he said.

But celebrity dreams are hard to realize, when economic and educational gaps are working against inner city youth. White House leaders said overcoming that takes a strong mindset.

Supporters believe My Brother's Keeper is a critical investment.

"You don't have to be perfect to be a mentor, to be a brother, you just have to be there," said Weis.

Milwaukee accepted the My Brother's Keeper Community Challenge in October 2014. It has since hosted a local action summit and will present an action plan for city approval later this year.