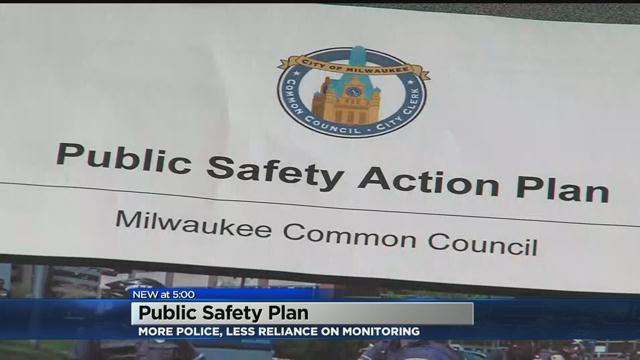 Members of the Milwaukee Common Council come forward with information about a public safety plan they've been working on all summer. For weeks, the council's public safety committee has called in leaders from the criminal justice system both in and around the city.

Sheriff David Clarke was interviewed by the aldermen, so was district attorney John Chisholm, and judges and many many more.

The goal was to come up with a public safety action plan for Milwaukee, something that resonates

Tuesday, council leaders held a press conference to talk about the plan.

The plan was supposed to be released earlier, but Common Council President Ashanti Hamilton says they held off so council members could put in their input before it was released. Hamilton also says the recent incidents surrounding Sherman Park delayed some members from viewing the plan.

Some of the plan details things the community may have already heard about, like a local juvenile detention center as an alternative to Lincoln Hills, and adding more police officer and sheriffs deputies.

There would also be an emphasis placed on hiring season officers in the summer to deal with increased crime. It also calls for a reduction in the "over-reliance" of electronic monitoring.

The message Hamilton stressed was that the plan is just a starting point.

"This is just a document to start the conversation. This is not something that the entire council has endorsed. What we're endorsing is a process, and what Alderman
Donovan as chairman of the committee has put on the table is something for us to talk about," said Hamilton.

The council has not even totaled how much all of the changes listed would cost -- as they expect the plan will be changed.

The council acknowledges there are a lot of suggestions, and some suggestions have been tried before, but it is important to bring all the findings to the table.

"We cannot dismiss what some people feel like would have a major impact on public safety, and put that on the table, and have an open public discussion about it, and so that's where we want to go with this. Nothing being hid from the discussion," said Hamilton.

The public will have the opportunity to discuss what's in the plan. There will be two meetings for the community will take place in the next month. Details on those will be released in the coming days.

The Public Safety Action Plan is available at: city.milwaukee.gov/CommonCouncil/